Plot:
Flynn (Jeff Bridges) is a very talented computer programer, who got fired from his job because his boss Dillinger (David Warner) wanted to use Flynn’s computer games as his own. Now Flynn, with the help of his friends Alan (Bruce Boxleitner) and Lora (Cindy Morgan) who still work at the company, manages to get himself into the company’s network to try and prove that it was him who created the games. Unfortunately, Dillinger has implemented a very tight security protocol which manages to actually pull Flynn into the digital world, where he finds himself battling said protocol – the Master Control Program (David Warner) – alongside Tron (Bruce Boxleitner), Alan’s security program.

I had never seen TRON before, but with the sequel and its cult-status, I figured I should get up to speed with what everyone was talking about. Well. Now I am fully informed and certainly underwhelmed. 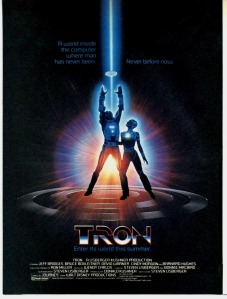 It’s not that TRON is a bad movie, though it’s not very good, but I think that I saw it too late. I’m used by now to pretty much flawless and much more impressive computer animation than TRON can offer. I can recognise its historic value in that regard, but it doesn’t make me jump from enthusiasm.

And apart from the visuals, it doesn’t have that much to offer. We’ve seen the story a billion times before. The acting isn’t bad, but it’s certainly not mindblowing [though it is kind of surprising how hot Jeff Bridges is in this film]. Especially Bruce Boxleitner and David Warner suffer from this mediocrity. 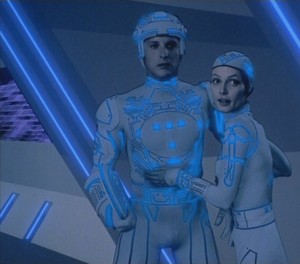 How do you know that this is a Disney movie, btw? They have to anthropomorphise everything. Even computer programs, who subsequently fall in love (for no other reason than their users do, it seems) or get bored. There is something fundamentally wrong with that. At least for me, it seems to remove the “computerness” from the programs, which kind of obliviates the point.

There are some interesting ideas there – that the programs would see the users as gods, for example. That alone would merit a whole slew of investigations (would programs really be religious? How do they get the notion of god anyway? etc etc etc). But they’re overshadowed by the preachy plot and don’t inspire me to seriously think about them.

Summarising: I think that an update of the movie (through TRON: Legacy) will certainly be interesting. But the original feels antiquated already.