Plot:
In 1938, Russia built a rocket sent their first manned mission to the moon and were therefore the first to arrive on the moon. But following that success, a series of problem arises and the story of the rocket and its astronaut Ivan Kharlamov (Boris Vlasov) is seemingly forgotten. Until video footage turns up and a team of journalists decides to make a documentary: the movie we’re seeing.

Pervye na Lune worked wonderfully. There’s much attention to detail and even if you don’t know your Russian history (welcome to the club), it’s very enjoyable and told with a nice sense of humor.

Aleksei Fedorchenko is a good director: the documentary structure holds up nicely and he never steps out of it. And there are none of the pitfalls that other mockumentaries fall into, like confusiung realism with boredom. I also liked the camerawork and the film was made to look like actual material from the 30s (including the accelerated movement etc).

The actors (apparently all amateurs) were very good, especially the older ones that get interviewed directly. For the “historic” footage is harder to tell because you tend not to focus on that part – but also there, props have to go out to the cast.

The script is good, too. The story is crazy enough to be true and not too crazy to disturb the suspension of disbelief. Nicely done.

The only thing I found a bit weird because it wouldn’t want to fit with the rest and smacked ever so slightly of being offensive were the scenes of the Snow White play. The movie could have done without that.

It’s a film to -rewatch, since I’m not sure I got it all the first time round. But I’d also like to see it again, so that’s a good thing. 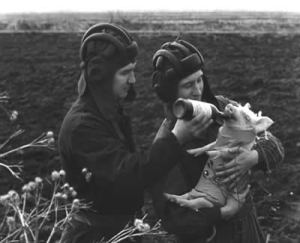