Plot:
Ethan Hunt (Tom Cruise) is currently in a Russian prison. But after another agent (Josh Holloway) gets killed, his team, consisting of Benji Dunn (Simon Pegg) and Jane Carter (Paula Patton), breaks Ethan out of there and together they try to infiltrate the Kremlin to find more information about “Cobalt”, who is connected to the agent’s death. But the mission fails spectacularly and suddenly, the three of them plus data analyst William Brandt (Jeremy Renner) have to clear the entire IMF’s name.

I am actually very suprised by how excellent  this film was. It really is a more than decent action movie.

I’ve enjoyed the Brad Bird movies I’ve seen so far, but since this is his first live-action film, I was a bit worried about whether he was going to pull it off. And not only did he pull it off, he really excelled at it. The movie is well-paced, very entertaining and has cool stunts.

A good part of that is due to the cast. They were really good, especially Jeremy Renner (though the monologue he delivers with his back story was not necessarily his best acting moment ever) and Simon Pegg (which was to be expected), but also Tom Cruise himself.

It was only toward the end that the movie started to fall apart a bit. After the action was over and the crew sits around in a coffeeshop and just talks, I lost interest and it started to drag. But since that’s the last about 5 minutes, that’s totally excusable.

It’s not a cinematic masterpiece – for that the plot doesn’t make enough sense and the dialogues are a bit wooden – but it’s good entertainment. And what more can you want from a movie of its kind? 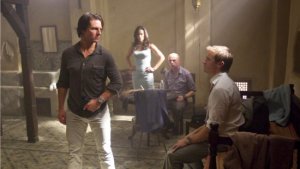