Plot:
Nasser-Ali (Mathieu Amalric) is a violinist who recently lost his violin. Unfortunately he can’t manage to find a new one that satisfies him and so he descends into a deep depression and decides to die by refusing to eat. While he wastes away, he  revisits important episodes in his life and imagines his kids’ futures. But maybe his depression has less to do with his violin and more with the woman he met on the street and  who didn’t recognize him?

Poulet aux prunes is a visually stunning film – especially every time they mix it up with animated sequences – and has a nice sense of humor. But Nasser-Ali is such an asshole that I couldn’t really enjoy the film. 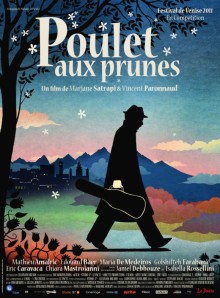 Mathieu Amalric always plays these guys that are actually assholes, but are supposed to be, if not exactly heroes then at least sympathetic. But where Michael Fassbender excels, Amalric always falls slightly short of the mark. And since I didn’t like the protagonist of this film at all, it made me impatient with his story. Even more than that – the way he treats his wife actually had me hating him.

This lack of connection with Nasser-Ali also made me not care in the slightest about the tragic ending of his love story with Irâne. So that part of the whole thing completely fell through for me.

But apart from that the film was really nice. As I said, I really enjoyed the visuals. Reminded me of Jeunet or Samuell with its color schemes, but it was especially beautiful whenever they mixed in the animated sequences.

And I also enjoyed the movie’s sense of humor and there were many very nice moments. Overall it just wasn’t enough. 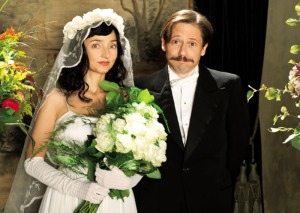 Summarising: could have been good, but somehow wasn’t.