Fernsehen und Angstbewältigung [which translates to TV and Coping with Fear] is a book by Peter Vitouch, an Austrian professor of Psychology at the faculty for Media Studies.

Plot:
Departing from the works of George Gerbner and his cultivation theory and Neil Postman‘s book Amusing Ourselves to Death, two works pretty critical of mass media, Vitouch looks at the way watching a lot of TV affects ourselves. He summarizes a few smaller studies he did himself that examine the way people retain and process information and what kind of programs they choose. He especially takes into account how they perceive the distribution of control in the world (based on the locus of control theory) and how they cope with fear.

Vitouch’s studies are interesting, but he’s not a very talented explainer of theories. Plus, everything just felt a tad outdated already. 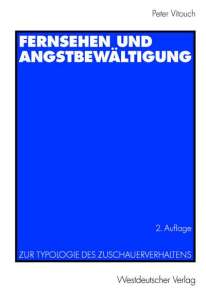 For a non-fiction book, this is a pretty quick read but it still feels like it was a little too long – mostly because Vitouch is pretty detailed about his studies. Which is of course perfect for the purpose of scientific transparence, but for somebody like me who just read it out of interest and not for some specific purpose, a shorter and, more importantly, more succinct summary of the results would have been nice.

As I am quite positive towards mass media in general (though I do of course see the drawbacks, too), I was not really surprised by the outcomes of the studies. They seem quite intuitive, but nevertheless, as they were done at the end of the 80s, an update and new version seems to be in order.

I also wasn’t quite satisfied by the theoretical explanations. I had to go over certain passages more than once to understand what he was getting at and I felt that it lacked more concrete examples.

But still it was rather interesting and, as I said, it didn’t take long to read. I just wasn’t really blown away by it.

Summarising: There’s a newer edition available, if you want to read it, but you probably won’t miss much if you skip it.