Plot:
Georges (Robert Pattinson) just returned to France after serving as a soldier in Algeria. Pretty much penniless, he tries to get by on his looks when he runs into an old colleague, Forestier (Philip Glenister). Forestier invites Georges into his home, introduces him to his wife Madeleine (Uma Thurman) and several other influential people. Soon Georges’s luck is looking up, as he sleeps his way up the ladder: he starts an affair with Clotilde (Christina Ricci) and works at the newspaper La Vie Française run by Rousset (Colm Meaney), though his articles are written by Madeleine.

I was pretty certain that I would not like the character Bel Ami, but that (female) cast just drew me in, despite myself. Unfortunately not even their awesome put together is enough to balance the combination of Robert Pattinson in that role. 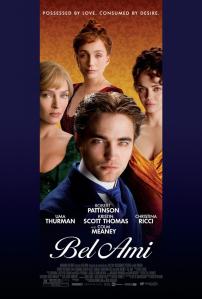 My problem with this film really wasn’t with the women. They were not only great characters, but excellently played. Especially Uma Thurman knocked my socks off. To see Kristin Scott Thomas in that role was particularly unnerving because she usually plays such kick-ass roles. I also liked Christina Ricci and her Clotilde, though I did have trouble understanding her fascination with Georges.

But that was my general problem with this film: Robert Pattinson just holds no absofuckinglutely attraction for me. Neither his looks, nor his charisma (or rather his lack of) do it for me. And trust me as vapid and shallow as Georges is, that role would have been a tough sale even if it was Ryan Gosling acting. And Robert Pattinson really doesn’t have what it takes to pull this off. I just wanted to hit him. And never stop again. 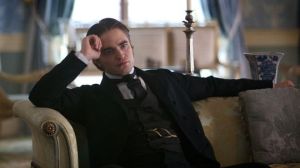 I haven’t actually read the book (and I really don’t know if I will), but I’m assuming that it hinges on the fact that you are charmed by Georges yourself. The movie certainly did. And since that didn’t work for me, it fell apart at the seams: as I didn’t care what happened to him (in the best moments. In others I wanted to see him die a billion horrible deaths), the movie started to drag, grew annoying and boring.

Honestly, after the film (which I saw in combination with Dark Shadows, so I should say after those two films) I felt so completely drained by frustration, I cancelled the rest of my plans that night and went home to sleep.

Summarising: Despite the women you should give it a pass. Unless you love RPattz.