Graceling is the first novel by Kristin Cashore, loosely connected to her novel Fire [which I’ve reviewed here and here] and followed by Bitterblue. I reviewed it here for the first time.

Plot:
Katsa is Graced: a special and extreme talent. Unfortunately, her Grace is to kill. She has suffered her whole life for it, constantly pressuring herself to get herself under perfect control, while having to work as a common thug and contract killer for her uncle, King Randa.
But Katsa sees the injustices in the kingdoms around her and decides that she can atone for her Grace by setting some things right. Therefore she forms a council that works for the people.
But when Katsa and the council rescue an old man who has been kidnapped and Katsa meets another Graceling, a fighter, she soon has to see that something is really very wrong in her world.

I wanted to read Graceling a little more slowly the second time round, like I did with Fire. It proved to be impossible. I fell into the book as much as the first time round and gobbled it up in only a couple of days. And again, there was laughing out loud and actual tears. 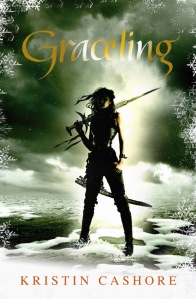 I cry easily when it comes to movies. Not so much with books though, so that this happens at all is already extraordinary. That it happens twice with the same book… I don’t think that ever happened to me before, actually. But there I was, still perfectly remembering how Graceling ended and nevertheless bawling my eyes out when [SPOILER] Katsa gets back to Po in that hut and finds him depressed and blind and how he finally recovers and *sniff* [/SPOILER].

When I just re-read Fire, I found a deeper appreciation for Brigan than the first time round (though I already liked him the first time). With Po, that didn’t happen. But only because I don’t know how that would have been possible. He is made of so much awesome. He is very high on my list of fictional ideal guys I wish were real so I can fall in love with them and screw their brains out.

I did like Katsa even better this time round, though. I loved her struggle for control over her life and how she sticks to being herself and her fierce loyalty and her development over the course of the book.

And since I knew that Bitterblue would be the star of the next book, I paid more attention to her. Which again, only improved my opinion. She’s amazing.

In short, I still can’t do anything but gush about this book. I already want to re-read it again. But first, there’s finally Bitterblue to get to.