Plot:
Wei (Wing Fan) and Jie (Meng-jie Gao) are cousins who could hardly be any more different but who still get along very well. Their family has many problems – Wei’s sister suffers from leukemia, Jie’s father is a gambler – and it’s up to the boys to help out. When Wei gets promoted from night club valet to debt collector, he manages to also get a position for Jie. At first things seem to be going very well, but debt collecting is not an easy business.

The Best of Times is a sweet, but a little depressing film. It tells an engaging story, has excellent performances and a really cool ending. 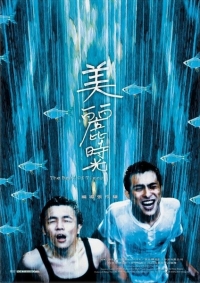 The Best of Times starts off with a rather realistic setting (which was nice as you got a feeling for life in a Taiwanese family) but then it changes to a slightly magical thing – though you hardly notice at first. There’s even a (admittedly fake) unicorn – a scene that made me laugh a lot.

The story it tells is generally pretty cool and I very much liked the two cousins, Jie and Wei. They made for very engaging protagonists, especially with their respective families in the background. The ending is sad, but not in a hopeless way.

The few instances of violence clash with the rest of the film a bit as they come and go very suddenly, but I didn’t mind that one bit. Actually it felt very fitting to have these violent flashes actually flash by.

Additionally Chang paces his movie well and it looks really great, which only makes it that much more enjoyable. It may not be perfect, but it is good.