Plot:
Jill Johnson (Carol Kane) babysits the Mandrakis’ kids when she starts receiving weird phone calls asking her to check on the kids. Instead Jill calls the police which saves her life and leads to the arrest of the psychopathic Curt Duncan (Tony Beckley). But seven years later, Duncan escapes. John Clifford (Charles Durning), the police officer turned PI who arrested him, goes on the hunt.

I didn’t really like the rather disjointed structure of the film (or John Clifford), but several parts of this movie were absolutely brilliant.

The most brilliant part of the film was the beginning – Jill’s terror was absolutely infective. I have rarely felt so terrified by a simple home alone with creepy phone calls. It was incredibly tense.

And I loved Tracy (Colleen Dewhurst) and her interaction with Curt. She was a brilliant character and Dewhurst played her with so much verve I couldn’t help but fall in love with her a little bit.

But I really didn’t like John Clifford. He was such an ass and pretty incompetent to boot. In fact, I liked him so little that I had a hard time rooting for him and Curt’s capture. Especially because Tony Beckley was so amazing as Curt that I started feeling sorry for him. (Yes, I felt sorry for the psychopathic killer. I might have problems.)

I also had issues with the soundtrack. It tried very hard to be the Psycho soundtrack, but the violins just became grating. 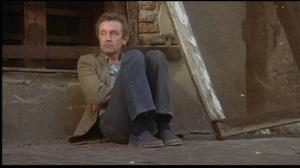 Summarising: uneven but the good parts outweigh the bad.