Plot:
Room 237 is a documentary about Stanley Kubrick‘s The Shining, or rather it’s about how obsessed some people can get with a topic. It showcases the various theories about The Shining floating around – like, really, The Shining is about the genocide of the Native Americans. Or actually, it’s about the Holocaust. Although, really, it’s all about subliminal sex messages. And of course, Kubrick meant it all exactly like that.

I do like conspiracy theories and hearing about the nuttery that goes along with them. And Room 237 gives you a healthy dose of just that. But nevertheless it does grow long. 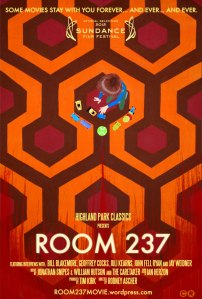 To be upfront about it, I don’t really buy into any of those theories. To me this entire documentary is about how you can interpret pretty much anything into a story, especially if it’s well told, and then find the clues supporting your theory. I also can’t quite believe that Kubrick, as obsessed with details as he was, [or anybody else for that matter] could control all the details as much as he is supposed to have done for all of these theories. [Though I think it’s perfectly possible that he wanted to screw with everybody.]

But that doesn’t mean it can’t be fun to hear about all of these theories. And for a while, Room 237 is a lot of fun. Unfortunately, the entertainment value is over before the movie is and the whole thing starts to drag.

I also was a bit annoyed by the fact that apparently none of the interviews were done with a camera – I would have liked to put faces to the interviewees. I’m also not so good with voices, so it was sometimes difficult for me to tell who was talking. (Though that’s probably more my own issue than the movie’s.)

The screening I attended was actually a double feature, showing The Shining afterwards. But since the whole thing started really late and then this movie was more work and less entertainment than expected, I skipped the re-watch. I might make up for it at some point, though.

Summarising: If you’re a huge Kubrick/Shining fan, but other than that, you can skip it.