Tangle of Need is the 11th book in the Psy-Changeling series by Nalini Singh. [Here are my reviews of the other books.] It’s Adria’s and Riaz’ story.

Plot:
Adria and Riaz are both soldiers in the SnowDancer wolf pack, pretty high up in the hierarchy, though both only recently found their place in the local pack structure – Riaz used to be stationed in Europe, while Adria lived in another territory. And both are trying to leave their pasts behind. As the conflict with(in) the Psys continues, Adria and Riaz have their own demons to fight – and their attraction to each other that neither wants to feel.

Tangle of Need drew me in very deep again. Though I might not feel the same excitement about this series that I did in the beginning, the books are still fantastic reads and exactly the right thing for me when I’m in the mood for fluff. 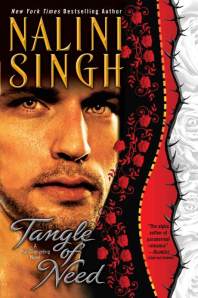 Mostly the books are fun to read because they all follow the same structure, you know exactly what you’re getting (right down to certain phrases and words Singh uses a lot) and that makes it the perfect comfort thing. Tangle of Need does differ a bit from that structure though – for example, there is much more Sienna and Hawke and much less focus on the “primary” couple than in the other books. Plus, [SPOILER] I would have thought that Singh finds a way again to get around the whole mating bond thing – I really didn’t think that she’d leave Riaz and Adria without one altogether [/SPOILER].

But while I’m still no huge fan of Sienna and Hawke (an opinion not many fans of the series share with me I think), I didn’t mind those (very slight) changes.

What I did mind, though, that we just don’t get enough of the Leopards anymore. I miss them all and I’d say it’s about time that the series returned to the DarkRiver pack. But at least we got to see more of Mercy and Riley again which I enjoyed a lot. (Though I thought that Singh’s throwaway remark about the mating bond between the two of them being just a mating bond and not connecting the two psychic networks was a bit insulting – it’s a huge gap in her continuity and would have deserved a better explanation.)

Anyhoo, I liked both Adria and Riaz a whole lot (though I didn’t get most of Adria’s hang-ups, I have to admit) and the whole Psy side is gaining speed – which is about time.

Summarising: still a fan of the series.