City of Ashes is the second book in the Mortal Instruments series by Cassandra Clare. [Here’s my review of the first book.]

Plot [with Spoilers for City of Bones]:
After the events of City of Bones, Clary’s life has fundamentally changed. Her mom is in a coma, she’s living with Luke, her mom’s best friend who turned out to be a werewolf, her feelings for Jace remain unchanged by the fact that she’s his sister, while she tries to make it work as a kinda-couple with her best friend Simon. And to make things worse, Valentine is still out and about, killing left and right, Jace is under suspicion of spying for him and is locked up and investigated and things just generally don’t look too well.

While there is much I didn’t like about City of Ashes (this series generally probably won’t ever be my favorite), I’m still enjoying it a lot and I’m still engaged in the story. And I already started reading book three, so there’s that, too. 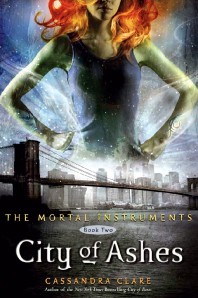 On the one hand, I have to applaud Cassandra Clare for sticking to her guns regarding the incest angle. There’s no backing away from it (so far, though I believe that might be coming), no “suddenly they didn’t feel that way for each other anymore” or any other deus ex machina solution. On the other hand, I wish there was, for the sake of my soul. I’m not exactly sure why it’s incest in particular that gives me all kinds of adverse reactions [probably because I have a brother who is about my age] but it does. And I’m not a fan of angsting anyway, so all of that made the entire thing a little hard to read.

But as I said, I can imagine that there will be a way out at some point. Clare drops hints like crazy in this one (and a couple of times she does so in the most annoying way possible – by letting her narrator know, but not the reader) and I suspect that Jace and Clary are actually angels and genetic experiments and not really siblings after all.

Which is also another thing that annoyed me. Clary was such a wonderfully normal girl and got to be the heroine, but in this one it turns out she’s SPESHUL after all. It’s not enough that she’s been a Shadowhunter without knowing it herself, but there has to be more abilities nobody has ever seen before. Could have done without that.

Also [SPOILER] Simon’s transformation into a vampire [/SPOILER] was the worst cliché.

Nevertheless, I’m still with the book and the plot and the character. And the pacing has improved as well.

Summarising: it works, but it doesn’t really get to me that much.