Plot:
Harry Deane (Colin Firth) is the art adviser for rich business man Lionel Shahbandar (Alan Rickman). He hates Shahbandar with a passion, so he hatched a plan to let him buy a fake Monet, painted by Major Wingate (Tom Courtenay). For that he needs the help of cowgirl P.J. Puznowski (Cameron Diaz). But as soon as they set the plan in motion, things are already going wrong and the entire plan is soon in jeopardy.

Apparently Gambit got really bad reviews. I don’t get it. It’s a perfectly entertaining film that makes its roots in the 60s felt and has a very nice sense of humor. I enjoyed the hell out of it. 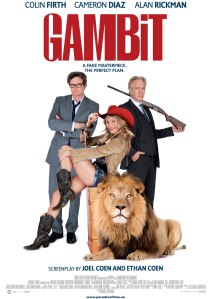 Gambit is funny, even if not all the jokes sit perfectly. I love Stanley Tucci, but his German accent was a little annoying and way too stereotypical (apart from the couple of words he says in German which sounded pretty much accent-free).

But apart from a couple of things that were a little too silly, the sense of humor was great. I loved the puns and the banter. I loved the Major’s dry narration. And all of the cast had me cracking up. Especially Alan Rickman and Cameron Diaz, though Colin Firth also got to shine. (He should do funny more often.)

The film is rather short, but that’s actually just perfect. Obviously they knew when to call it quits, remaining engaging throughout the entire story. It had me laughing out loud a couple of times.

I have to say that this film, for me, breaks the Coen-Brothers rule that worked so very well: I usually only like every second film by them. But I did like True Grit and I also liked this one, so it doesn’t work anymore. maybe because they didn’t direct? Any way you look at it though, I liked this film.

Summarising: If you wanna have a good laugh in the veins of 60s screwball comedies, this is your ballgame.