Plot:
When tattoo artist Elise (Veerle Baetens) and bluegrass singer Didier (Johan Heldenbergh) meet, it’s the start of a big love story, despite their different lifestyles. A few years later they’re still together and have a daughter – Maybelle (Nell Cattrysse). But when Maybelle starts battling cancer at the age of 6 and we retrace the steps of Elise and Didier’s beginnings, the question arises whether they’ll be able to get through this. 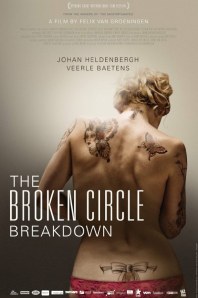 When you go into the film, you can already taste the doom. You’re pretty sure that there is nothing much that will go right here. And even though it starts lighthearted, it becomes heavy really quickly. And nevertheless you can’t help but smile with Elise, Didier and Maybelle as they try to work through things and you see how strong they are together and somehow you start believing that maybe the doom you tasted before was just a misdirection. And then they start to tear into each other and they also tear into you that way.

The problem is that you can just relate to everybody in this film and you get thrown around by it and everything that’s happening to them. And it hurts. That’s because Johan Heldenbergh and Veerle Baetens are great and they really bring Didier, Elise and their relationship with each other to life. And Nell Cattrysse was also very impressive.

Felix Van Groeningen has a talent to show you just a short scene and you know exactly what’s happening and what he wants you to see. Sometimes that makes the film a little heavy-handed, the script a little too unsubtle, but mostly it works like a charm.

And the setting in two subcultures was really interesting, too. Both the bluegrass angle as well as the tattoo angle were extensions of Didier’s and Elise’s personalities, respectively and that symbolic level was beautiful. Also, it made for a fantastic soundtrack.