Plot:
Fin (Peter Dinklage) lives a very quiet life working in a model train shop. Until the shop owner and Fin’s only friend Henry (Paul Benjamin) dies and leaves Fin an abandoned train station in the middle of nowhere where Fin decides to move to. There Fin is found by Joe (Bobby Cannavale) who runs a foodtruck for his sick dad and then Fin is almost run over – twice – by Olivia (Patricia Clarkson), a painter going through a rough time. All three are obviously lonely and struggle with human contact in very different ways. But somehow that seems just the perfect recipe.

The Station Agent was a really sweet, entertaining and pretty much wonderful film. There is nothing not to like about it. 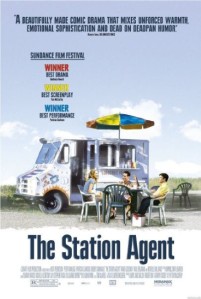 I had heard good things about The Station Agent and since I’m a fan of Peter Dinklage, it was clear that I had to watch this. So I didn’t really inform myself about the film beforehand (something I tend to do more and more. I barely watch any trailers anymore, especially since they give way too much away) and I was under the impression that it was a romantic comedy. Turns out it isn’t. What it is is a look at the various kinds of loneliness and how friendship works.

At first glance it seems to be only Fin who is lonely, especially since he represents the “classic” loner – he doesn’t have any contact, his dwarfism pushes him to the edges of society, he’s not a particularly outgoing person. But then you have Olivia who isolates herself in her grief as much as her grief isolates her. And you have Joe who is constantly on the phone and butting into people’s lives in the hope the somebody won’t turn him away. And there’s even Emily (Michelle Williams) who is so alone that she screams the first time she meets Fin in her library – because she didn’t think anybody would be there. And let’s not forget Cleo (Raven Goodwin) who spends her afternoons alone, refusing to see Fin as an adult because she’s looking so much for a friend to play with. And I honestly couldn’t say who I like more.

In this world populated by lonely people things could get depressing really quickly. But somehow they don’t. Thomas McCarthy manages to keep things touching without weighing you down. There is always a sensitivity, a levity and especially a whole lot of warmth that surround his characters that keep the whole film afloat. Even as you start to cry, the film doesn’t bring you down.

I rarely feel that a film just HAS TO have a happy ending, but with The Station Agent that was exactly what I felt. I was so invested in the well-being of these characters that I really couldn’t bear the thought that they might not end up being happy and maybe not that lonely anymore. And that kind of commitment is probably the best thing a film can hope for. 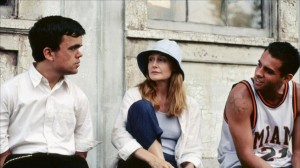