Plot:
Xerxes (Rodrigo Santoro) and his army have defeated King Leonidas and his army, and now they’re heading for the rest of Greece. War hero Themistocles (Sullivan Stapleton) seeks an alliance with Sparta and its Queen Gorgo (Lena Headey) and leads the defensive forces and has to face Xerxes’ sister and commander of the navy, Artemisia (Eva Green).

300: Rise of an Empire is a problematic mess that can’t be taken seriously. Unfortunately we had too little alcohol with us in the cinema. Nevertheless there was some enjoyment to be had. 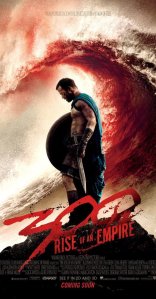 I have to admit that I pretty much love 300, despite being no less problematic than its sequel (maybe even more so). But I saw it at a young, impressionable age (though I wasn’t as young as I thought I was – I thought it must have been at least 10 years since the film came out, but it’s only been 8) and I fell in love with it and that fondness has remained. It did not transfer to 300: Rise of an Empire though. There the messy part trumped most of everything else.

What I still liked though, were the visuals. I like the hyperstylized way the colors and the slow-motion are used. I think it fits well with the mythological nature of the story. And it just looks good.

What I liked less was the way the women were portrayed (though Gorgo was still luckier than Artemisia): on the surface they are strong women and leaders, but when you look a bit further, they only get to be strong so it looks better for the men when they take them down a notch. (Plus, how many clothes can one navy commander really have? Artemisia wears a new dress in basically every frame.) The underlying racism and xenophobia also does the film a disservice, to put it mildly. Xerxes literally isn’t human and Artemisia – who is smarter and better and more awesome than him anyway – was born a Greek who might have been brought up as a Persian, but her strength and prowess mostly comes from her heritage.

That I still found the movie enjoyable in parts was also due to the abs, I will admit it. But mostly it was because of the alcohol. There only should have been more of that.