Eyes Wide Open: Stanley Kubrick as Photographer was an exhibition at the Kunstforum Vienna.

Stanley Kubrick started his career as a photographer for Life Magazine before heading into film. He mostly took photos of people, doing entire portraits of more or less famous people, but also (more or less staged) snapshots on the street or in public transportation. The exhibition I saw tried to give an overview over his work as a photographer by showing the span of his photo essays which worked very well. We also had an interesting guided tour. Generally I think I like his photographic work better than his cinematic work, though already in his photographs he shows a keen eye for the right moment and for the (necessary) theatracality.

You can find some of my favorite images after the jump. 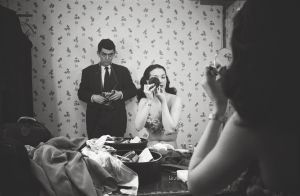 I particularly liked his circus series:

Actually this image wasn’t in the exhibition, if I remember correctly. But it’s so awesome, I needed to include it anyway.

And the photo-essay about Rocky Graziano: 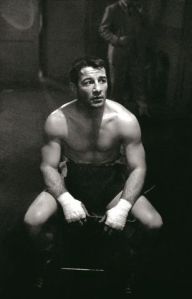 Or the one about Montgomery Clift: 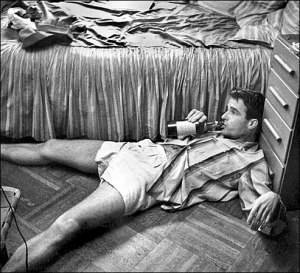 And, of course, Mickey (I think) the shoe shine boy:

And his photography of Jazz musicians (of which I couldn’t find a whole lot online):

Finally his essay on Columbia University:

Unfortunately most of the photos were about the guys and the photo portraits of women usually involved some state of undress on their part – because they were dancers and he photographed them in the dressing room, for example. I don’t know if that was by choice of the curator of the exhibition or because Kubrick mostly photographed women when they were half-naked, but it did annoy me a little.

But mostly I really enjoyed the exhibition and I’m glad I saw it.