Plot:
Frankie (John Lloyd Young) is a hairdresser apprentice in the part of New Jersey that’s firmly in the hands of the mob. His best friend is Tommy DeVito (Vincent Piazza) he is constantly involved in some kind of scheme. But Tommy also has a band and Frankie has a beautiful, if unconventional voice. Together with Nick Massi (Michael Lomenda) and finally Bob Gaudio (Erich Bergen) they form a band – The Four Seasons. Slowly they start their way to the top. But their neighborhood isn’t easily left behind.

Jersey Boys starts strong, but can’t really keep up the momentum. At least the music is consistently good and quite contrary to most Eastwood films, it doesn’t really get boring. 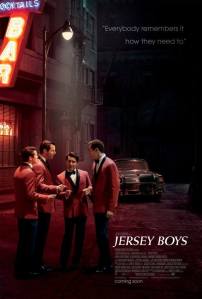 There are various instances in the film where characters turn towards the camera and talk to the audience directly. In the beginning, as long as it’s only Tommy doing that, that works surprisingly well, establishing him as the narrator, even if not an entirely reliable one and giving the early setting a very distinct flavor. But when other characters start doing that, too and the story pushes away from Tommy, that particular device lost its charm. And in the end when all four of them give their various end statements directly into the camera, I didn’t want to hear it anymore.

Maybe also because the old people make-up was pretty bad, especially for Frankie. But that was generally a problem the film had: while John Lloyd Young’s voice is a perfect fit for the role, he just never looked the right age. At first he looked too old for 16, then he looked too young for being a dad of quickly growing girls and then he looks just like a really young guy in bad make-up instead of a senior.

But the film’s bigger issue was definitely the writing and plotting. The plot was all over the place and should have been more focused. And I don’t want to hear for the first time that Frankie’s daughter would like to be a singer when he offers her a recording session as a save-all. Generally, the way the (very few) women were introduced and cut out of the story was pretty atrocious. It is obvious that to the writers the women in Frankie’s life didn’t matter much, unless they could provide a bit of conflict for Frankie. You only know that he has three daughters and not just one because the other two sometimes stand around in the background. But they found enough time to include various butt shots and scenes of drunken debauchery and generally using women as sex objects.

I guess they were lucky that the music is really excellent since it carries most of the film. I mean, there’s also Christopher Walken who is amazing of course and Michael Lomenda’s awesome melt-down that was probably the best scene of the film. But once the film actually has to tell the story of Frankie outside of Jersey, it fails completely.

Summarizing: Eh. It is entertaining enough.