Plot:
Marty (Joshua Burge) doesn’t really have a place in life. He works for a temp agency, currently deployed at an office where it doesn’t matter at all whether he’s there or not. Which Marty uses completely to his advantage. But as he keeps pushing the limit, scrabbling for a halt somewhere, he slowly graduates from minor frauds to more serious offenses.

Buzzard could have been a political film about the disorientation of a generation that gets lost in the capitalist system that keeps on promising everything and delivering nothing. I think that was the intent. But unfortunately instead we got a film about a petulant, bored, little boy who behaves horribly. 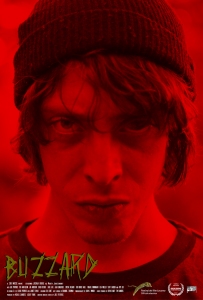 The film didn’t start off badly. Marty actually rebels against the system when he walks into a bank to close his account and reopen it immediately to get the “open your account today” bonus; or when he goes on break forever from his job to see if anybody ever notices; or when he returns office supplies he ordered on company dime and keeps the money. But when he starts to steal and cash checks, it stop being using “The Man” as “The Man” uses him. Instead of playing the system, he starts stealing from people who are just as much victims of the system. And with that he lost all my sympathies.

Which honestly wasn’t that difficult because Marty isn’t especially lovable. But in particular when he becomes more violent, he lost me. Fascinatingly in the talk afterwards, the director said that you are supposed to be surprised by Marty actually using the Freddy Kruger claws he builds by hitting somebody – I was surprised that it didn’t happen way earlier. I expected Marty going on a killing spree by around minute 20. 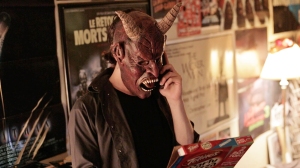 At the end of the film it got so bad that I wished for Marty to fall and just accidentally stab himself to death with the claws. Or when he sees his own live feed camera image walking away (which is the single strongest moment in the entire film even if I was wondering what the fuck it did there anyway), I wanted it to come back and kill him (honestly, that ending would have very much redeemed the film in my eyes).

There was potential. Joshua Burge was interesting in the lead and Marty’s character arc was very well realized. Unfortunately it was just completely diametrically opposed to the story it was trying to tell. And that made it unbearable.