Plot:
Citizenfour chronicles the process of how whistleblower Edward Snowden contacted documentary filmmaker Laura Poitras and journalist Glenn Greenwald to release classified information about major surveillance of private citizens by the NSA, via use of telecommunication companies.

Citizenfour tells not only an important story, it does so in an engaging and accessible, reminding us once more of the absurdity and the outrageousness of the NSA’s (and other intelligence agency’s) actions – which are far from over. 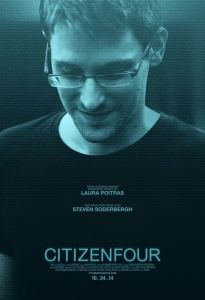 Poitras was in a very rare position as a documentary filmmaker to be able to actually capture the events as they happened and not having to reconstruct them after everything’s already over. That meant that the entire film felt extremely immediate and the tension underlying the situation was absolutely palpable. Even though I knew how things would end, I was nevertheless worried with Snowden about the actions against him. He might as well have ended up dead – or at least that’s what he was afraid of – and probably only didn’t, because he was very smart about releasing the information he had gathered.

That information is still as incredible now as it was back when it was first released. Surveillance of pretty much every phone call made, every text or email sent, governments coercing private companies (some needed more persuasion than others) to reveal data, legalities be damned, and everything on an international or almost global scale. If that doesn’t make you paranoid, nothing will.

The documentary also came at a good point in time, where everything seems to already have died down a little and now is getting some traction again. Because, despite Snowden’s admirable actions, things didn’t really change. People know now that the NSA is listening – but the NSA didn’t stop to listen, quite to the contrary. And Snowden still sits in exile in Russia (his 39 days caught in transit on a Russian airport where not really covered by the film – the absurdity of that would have probably given the film a ridiculous touch that would have ultimately harmed it).

Poitras puts the tension of the situation, the unbelievable information and both Snowden’s and Greenwald’s charisma expertly together to give an overview about the events that feels comprehensive and makes you want to do something about it all. And that is excellent documentary filmmaking.