Plot:
P’tit Quinquin’s (Alane Delhaye) home is a tiny village in Northern France. He, his friends and his girlfriend Eve (Lucy Caron) drive around on their bicycles, always looking for something to do. So when a helicopter arrives, they follow it and are close, when the police retrieve a dead cow from a ditch. But that is not all: inside of the cow they find at least parts of a body and now Commandant Van der Weyden (Bernard Pruvost) and his lieutenant Carpentier (Philippe Jore) have to figure out who put it there.

I can’t recall the last time I was this bored during a film. I had to keep hitting pause as I kept falling asleep while I watched it. And I didn’t see it late at night but pretty much right after getting up after a good night’s sleep. There was practically nothing that worked for me.

P’tit Quinquin was originally a miniseries which they glued together to make a film that is about three hours long. That it was this long definitely didn’t help, especially since it felt like they achieved that length by just having every shot be about 30 seconds longer than it should be. There is definitely not three hours wort of story being told – making it even more annoying that we don’t even get a proper resolution of what little story there is.

But even if it had been shorter, I’d still have various problems with the film. From the fact that the parts revolving around Quinquin and his friends and the murder investigation didn’t ever come together for me. They stayed parallel without actually drawing any parallels and the few times they do intersect doesn’t enhance the plots either. 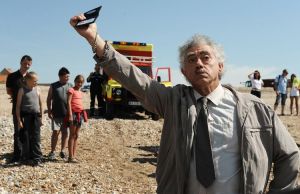 I also felt like I was supposed to laugh at stuff that just plain wasn’t funny. Especially wehn it comes to Van der Weyden who has an abundance of facial tics – and that may be sometimes exhausting, but funny it is not. Neither were the incomprehensible (both regarding acoustics and content) remarks he keeps muttering. Other than that, I can’t really think of anything that was even remotely funny – for a movie that is touted as a comedy that is pretty thin.

I appreciated the, for a film, unusual faces and the time inbetween that Dumont took to just shoot portraits of them (even though, considering the felt and actual length of the film, a fewer faces would have been good as well), although I couldn’t help but feel that there was a certain sensationalism to this, as to the tics, trying to ridicule the unusual, showing it not only as something normal – because there are people with tics and with disabilities and with with unusual faces everywhere – but as something deformed and which somehow has to carry a meaning beyond the mere fact that these people look that way. I also liked the unflinching way Quinquin’s (and friends’), as well as Van der Weyedn’s racism was shown, but here, too, only with a caveat since it remains unchallenged and one could say they might even be proven right by Mohammed’s, one of the muslim immigrants in the area, actions later-on in the film. [The possible racial motives of the murders actually investigated are lost between the tics and the cows.]

In short, the only thing I really liked abou the film was the song Cause I Knew. But that is certainly not enough to keep me going through three hours of film.