Plot:
Doc Sportello (Joaquin Phoenix) is a private detective who spends most of his time being high. When his ex-girlfriend Shasta (Katherine Waterston) surprisingly visits him to tell him about a plot against her current boyfriend, real estate tycoon Wolfmann (Eric Roberts), by his wife Sloane (Serena Scott Thomas) and then disappears, Doc takes up the investigation. As more people go missing and the police in the form of Christian ‘Bigfoot’ Bjornsen (Josh Brolin) gets involved as well, Doc quickly finds himself in deeper than he expected.

My relationship with Paul Thomas Anderson is difficult. With few exceptions I just don’t care for hard-boiled Detective Stories. Stoner movies are not my cup of tea. So it probably comes to no-one’s surprise that I did not like Inherent Vice, though it did surprise me how bored I was by it. 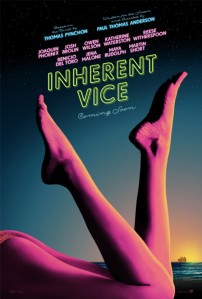 I was hesitant about seeing this film for all of the reasons mentioned above. I even spent a few minutes reading the book, but I couldn’t get past the first few pages – it just hit all the wrong buttons for me. But in the end I couldn’t resist the cast and I still hoped that it would at least be entertaining.

It wasn’t to be. I realize how Inherent Vice is a spoof of the genre, but also a homage and a straight entry into it and that was well-made. On an intellectual level I can appreciate a “hero” like Doc Sportello who feels like he’s passively floating on a cloud of weed, but keeps on becoming active in incredible bursts of violence. I understand how Doc’s exchanges and general relationship with Bigfoot is all kinds of weird and funny. 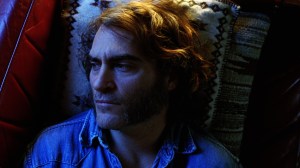 But the thing is: I knew all of those things, but I didn’t feel them. Doc and Bigfoot never actually made me laugh. Doc’s passivity and constant drug use got on my nerves, but when he becomes active and violent I could stand him even less. In the end I started to feel like I was just as passively limp as he seemed, flopping in the cinema seat and just waiting for stuff to happen to me and wishing for something to take to make the entire thing more bearable.

The only thing I honestly liked about it was the narration. I liked that it was narrated by a woman, a friend of Doc’s and not himself. And Joanna Newsom does a wonderful job with it. But other than that, there was nothing I really enjoyed about the film. 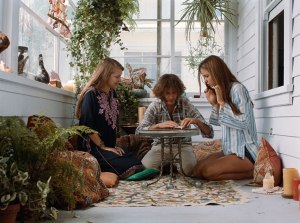 Summarizing: Not my thing. Not at all.