Plot:
Ventura (Ventura) is staying at a dilapitated (mental?) hospital, or so it might seem. Constantly circling around his own past in the revolution of Cabo Verde, but also encountering other figures whose lives were touched by the revolution – a woman (Vitalina Varela) who lost her family who apparently knows and doesn’t know Ventura.

Cavalo Dinheiro is hard to sum up, hard to understand and hard to like. Personally I failed on all three counts, and I was far from engaged enough in the film to really try and make more of it. About halfway through, if not earlier, I just gave up and waited until it was over. 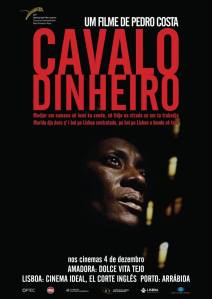 I don’t mean to say that there is nothing intriguing about the film. Some of the shots and images Costa and his camera man Leonardo Simões create are wonderful and evoke a feeling of loss and unease, but also longing, which seems to capture the mood of a sad and tired, old man very accurately.

But despite that evocative nature of the images, I never really connected with the film emotionally until one of the last scenes that takes place in an elevator, in which Ventura talks to the statue of soldier. There finally something emotional erupted in the film, making it poignant, but unfortunately that came way too late.

Because until then I had to endure so much incomprehensible rambling that I just didn’t care anymore. Maybe it would have been better if I had any kind of knowledge about the happenings in Cabo Verde. But even if I had been an expert on the history of Cabo Verde, I’m afraid that the film would have left me cold. I’m just not that much of a sucker for dream logic stuff. And Vitalina Varela’s constant whispering was annoying and literally incomprehensible – without subtitles I would have been completely lost (and not just because my Portuguese is rusty).

In the end I spent most of the film waiting that it would be over. And that’s not what I want from a movie.

Summarizing: Only if you’re really into Cabo Verde’s history.