The Guernsey Literary and Potato Peel Pie Society is an epistolary novel by Mary Ann Shaffer and Annie Barrows.
Finished on 06.03.2015.

Plot:
Shortly after WW2. Juliet Ashton is a successful columnist who recently published a book with collected essays and is now struggling to find a topic for a new book. That’s when she receives a letter from Guernsey from Dawsey Adams. Dawsey has bought a book with essays by Charles Lamb that used to belong to Juliet (and has her address in the front) and is now looking for more information about him. Juliet becomes interested in the history of Guernsey during the war, and in particular the history of the Guernsey Literary and Potato Peel Pie Society Dawsey writes about, and decides that she wants to go there to find the stuff for her new book.

I really enjoyed The Guernsey Literary and Potato Peel Pie Society. It’s funny, smart and light-hearted, despite giving a very real impression of what life after the war was like. 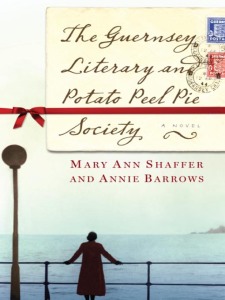 The Guernsey Literary and Potato Peel Pie Society is an epistolary novel and it’s been a while that I read one of those. But I quite like the format and it was really nice to get back to it. Especially since Shaffer and Barrows really know how to suggest relationships in only a few words. Even though the characters never interact directly, it was absolutely clear how they felt about each other.

It was also interesting to hear about the historical situations, both of life shortly after WW2 and the fate of Guernsey during the war. I was barely aware that there were channel islands at all, let alone what happened there during the war. (Austrian history lessons are mostly pre-occupied with the Austrian role in the war – pretending that we were only poor victims takes a lot of work, after all.)

The plot is not very surprising (though I did like the discovery they make towards the end that I did not see coming), but I wouldn’t have wanted any surprises anyway – it was important that the right people end up together and that all the right emotional buttons were pressed. And while the plot might not be revolutionary, Juliet was a wonderful character and rather unusual for a portrayal of a woman.

The Guernsey Literary and Potato Peel Pie Society would have been the perfect holiday read. That I didn’t read it while on holiday had the benefit though that it made me feel a little bit like I was. And that is always useful.