Plot:
Alice Howland (Julianne Moore) is a very successful professor for linguistics. She’s happily married to John (Alec Baldwin) and has three children (Kate Bosworth, Hunter Parish, Kristen Stewart) with whom she gets mostly along. But Alice has noticed that she keeps losing words and has trouble remembering things. Shortly thereafter she is diagnosed with early onset Alzheimer’s and has to face the fact that she will not only lose her memories, but also herself and her entire life in a very short while.

Still Alice was a touching and smart film with really wonderful performances. I cried a lot which is probably what the film is made for.

Julianne Moore takes center stage in the film, of course. And I can’t really imagine anybody else playing that role, she does it so well. Whether Alice is angry or sad or confused, Moore commands the screen at all times, drawing every gaze and making practically everything around her disappear. The only ones who stand any chance of not being swallowed all the time are Alec Baldwin and Kristen Stewart, though Stewart is more successful.

When you got a force of nature like Julianne Moore there is not much else that you need. But the film has it nonetheless. The script is excellent. I haven’t read the book, but it feels like the movie was able to incorporate a lot of back story from it, making the characters fully fleshed out and complex like you rarely get to see them in a film. 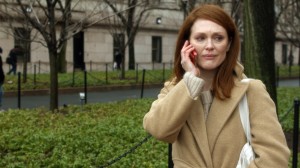 The story is not easy to take. To watch Alice slowly falling apart is certainly no pleasure. And I don’t think I have been ever more devastated by [SPOILER] a suicide attempt not working out [/SPOILER] than I have been in this film. The tension in that scene was generally almost unbearable.

This is a film that should come with its own unicorn chaser, but despite the very depressing content, it still manages to incorporate a little be of hope and forgiveness without glossing over the realities of that illness. It doesn’t romanticize, but neither is everything awful. And that is a very hard balance to strike.