Plot:
Lucile (Michelle Williams) lives with her mother-in-law Madame Angellier (Kristin Scott Thomas). The Angelliers are one of the richest families in the areas and Madame Angellier sees no reason not to continue getting her share from the farmers who work her lands just because it’s war time. Lucile – whose husband is a soldier – doesn’t like that strictness and harshness, their relationship is tense. Their situation grows even more difficult when the Germans reach their village and office Bruno von Falck (Matthias Schoenaerts) is placed in their home. Madame Angellier insists on ignoring him, but Lucile feels drawn to Bruno after she discovers that they share a passion for music.

Suite Française is a strong film although it didn’t quite manage to blow me away. Still, it’s a touching story with a strong cast and I wouldn’t have minded seeing more of them at all. 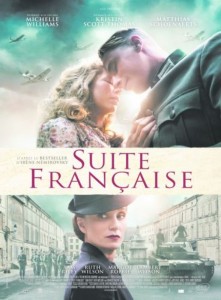 I haven’t read the novels, but from what I gather from wikipedia, Némirovsky had planned to write five novels, two of which she more or less finished (for the third, she wrote an outline). Although the two novels where published togehter as Suite Française, the film actually only deals with the second novel, Dolce. And the third novel would have picked up at least some of the events of Dolce to continue them, so the novel – and with it the film – lacks a bit of closure. I certainly wouldn’t have minded to find out what happens next, especially since the film leaves us at a pivotal point in the story, a dramatic climax.

But closure or not, the story did captivate me. I really liked Lucile and I loved that we got so many varied female characters in the film, which sadly is far from being normal. There were many (more or less successful) ways to deal with living in an occupied town as a woman – and it was mostly women because most of the men were at war – and Suite Française doesn’t limit itself to one. And it shows how difficult it is for both Lucile and Bruno who are so entangled in the general power structure that whatever feelings they have for each other can not be seen as separate from that structure, try as they might.

Michelle Williams and Matthias Schoenaerts both do an amazing job (unsurprisingly). Williams makes Lucile’s discovery of her fighting spirit seem absolutely natural and manages to portray her conflicted ambivalence with apparent ease. Schoenaerts may not be quite as magnetic here as in Maryland (my new landmark for charismatic performances), but not as magnetic for him still means incredibly so when compared to the average. [SPOILERS] Especially in the scene where Bruno executes a man for betraying the German, [/SPOILERS] the emotions that play over his face gave me goosebumps and makes Bruno as a character. Even his German is really good. The two of them barely leave any room for the rest of the cast, but that doesn’t mean that they aren’t excellent.

Despite all those good things, the movie didn’t entirely pull me under. Maybe because it doesn’t really tell a new story anymore. At the time of its writing, it was certainly groundbreaking, by the time it was published 60 years of stories about World War II had happened. Nevertheless, the film is certainly very worth watching and it’s certainly not completely redundant or unmoving.