Plot:
Two students need to transport a body from Vienna to Russia which is a pretty expensive thing to do officially. So they decide to pretend that the body was simply drunk and to smuggle it to Russia by night train.

Meine Mutter war ein Metzger is a short film that was shot pretty much without a budget and in black and white, making it feel older than it actually is. But that doesn’t hurt the film at all. Neither does the fact that I can’t quite believe that the outlandish story is based on actual events like the film claims. Whether it’s half-true, all-true or all-made-up, it’s a funny film with awhole lot of black humor. I wouldn’t have minded if it had been longer. 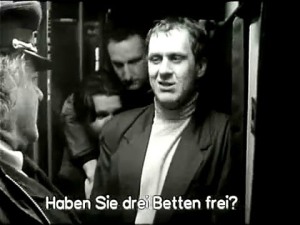