Plot:
Judah Ben-Hur (Charlton Heston) is a successful merchant in Jerusalem, despite the Roman rule Jerusalem finds itself under. When he hears that his childhood friend Messala (Stephen Boyd) returned to Jerusalem as head of the Roman garrison, he is overjoyed. But their happy reunion is soon overshadowed by the reality of their very different politics and social standing. After an unfortunate accident, Messala sends Judah to the galleys as punishment, and Judah’s mother Miriam (Martha Scott) and sister Tirzah (Cathy O’Donnell) to prison. Judah swears that he will return and take his revenge on Messala.

I went into Ben-Hur knowing very little about it, but I wanted to see it because a) classic and b) remake. “There are chariot chases and Romans,” was about the extent of it. So a few things took me very much by surprise – like the fact that this is a religious film. This is not the only reason but a contributing factor to my utter boredom during the film and my decision to not watch the remake because why would I put myself through that twice?

If it was up to me to remake Ben-Hur, I would cut all that Jesus stuff out, reducing the film’s runtime by a good hour or even 90 minutes and focus entirely on Judah’s and Messala’s relationship. And not just because it is full of homoerotic tension (it was only after the film that I found out that this was actually intended, even if Heston knew nothing about it), as is the entire thing with all its naked glistening chests in the dust. Without the shoehorning in of Christianity, I think that the film would have a very decent chance to be a gay revenge thriller.

Alas, this is not the film that was made. So we have to sit through not only a whole lot of religious pomp and spiritual awakenings (which is simply not my thing), but also a whole lot of sexism (Judah’s wife was such an afterthought and so completely tacked on, it was simply embarrasing; and his mother and sister were interchangeable objects simply there to give Judah something to be in about other than his own pride) and ableism (of course there’s some magic healing in the end because we couldn’t possibly have characters with bodily ailments in any form). Plus, I probably don’t have to mention the whitewashing of the cast and characters. 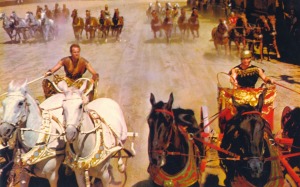 At least the film looked great. The sets and costumes were pretty amazing and the aforementioned chariot chases – while taking up way less time in the film than I thought – were beautiful to watch. It’s no surprise that they were formative for how chase scenes and action sequences are made.

But other than that, I simply could not enjoy Ben-Hur – it just dragged on and on and it was only it classics status that kept me from turning the film off entirely at some point in the middle.

Summarizing: Parts of it are definitely worth seeing, but maybe fast forward through the other stuff.