Plot:
Maddy (Emily Norris) loves nothing more than doing gymnastics and she is pretty good at it, though she lacks confidence. When their old trainer Beverly (Carmel Johnson) becomes ill, Kate (Nina Pearce) takes over the team to train. But at their first competition together, things don’t go well for them. Head of the jury is Sally (Amy Handley) who shares a long history with Kate – and it’s not a positive one. And Sally uses that against Maddy and her team. Both Kate and Maddy are ready to give up, but Beverly suggests that they should get the help of Shane (Adam Tuominen), the boys’ coach, and give it another go.

Good grief, people. It is actually embarrassing that this is a professionally made film, proving that people more often than not just don’t give a shit about quality if it’s a film made for kids. And – since I watched it only because it was my niece’s favorite film at the time – that kids often don’t care, either.

Speaking of the plot: it is utterly predictable. There is not a single moment that I couldn’t have told you after the first five minutes of the film. But that is actually a necessity: since none of the characters’ decisions make any sense whatsoever because they don’t get motivations or reasons, total trope reliance is the only way to still tell a comprehensible story. 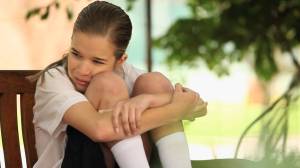 And I’m not even getting into the fact that the girls’ team needs to train with the boys to be able to win (oh yes, that’s the gender view they have). Because there’s nothing I can say that adequately expresses my shocked outrage at the entirety of the film, from anti-feminist message to basic filmmaking competences.

Summarizing: Oh hell no. So much no. No no no.