Plot:
Georg (Josef Hader) has worked as a critic of classical music for decades, but with budget cuts hitting media outlets, he is fired. When it happens, he finds he can’t tell his wife Johanna (Pia Hierzegger) who is hoping to become pregnant despite being over 40 already. So Georg pretends to go to work every day and instead finds himself in the Prater, Vienna’s big amusement park. There he runs into Erich (Georg Friedrich). Despite their differences, the two start to spend a lot of time together, starting to renovate an old rollercoaster. But Georg is also set on taking revenge on his former boss Waller (Jörg Hartmann).

Wilde Maus is a dry and very black comedy that makes you laugh more often than it’s actually funny. It could have stood more female voices, but I did enjoy it.

The set-up for the story is far from new, and that’s probably the biggst problem the film has: how often have we seen stories about men who get the rugs pulled out from under them and then have (more or less) severe crises as a result? It feels like it’s a very regular occurence in any case. And usually we’re supposed to go along with the poor, poor guy who is actually drowning in self-made misery and wouldn’t have to suffer if he’d just, you know, talk about things and tried to move on instead of wallowing in self-pity.

Georg is a prime example of that. But there is enough self-awareness in the film to not have it go overboard. Johanna especially gets a few good shots in to deflate Georg’s self-involved ego a little – managing to separate the legitimate crisis from the self-pity. But I would have liked it if she (and other women) got to say a little more than what we got. Because in the frequency it was done, it felt a little like lampshading to excuse executing the stereotype.

I also would have loved to see more of Erich but that’s mostly because I love Georg Friedrich and I can’t think of a single film where I don’t want to see more of him, and less to do with the film at hand.

In any case, as is usual for Hader, he manages to make you laugh even when things could easily be seen as very tragic – and in another director/writer/actor’s hands probably would be. It’s good character work and great writing and makes for an enjoyable film, even if it’s one that didn’t totally blow me away. 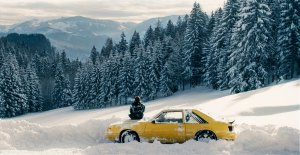