The Shadow Speaker is a novel by Nnedi Okorafor.
Finished on: 8.4.2017

Plot:
In a post-nuclear future, Eiji lives in a small village in Nigeria. She has a difficult position there: her father used to be the dictator of the village, claiming that he did the bidding of the Red Queen, a much respected nomad. But when the Queen herself came to the village, she beheaded him instead of supporting him. In addition to her family history, Eiji also has magic powers – she is a shadow speaker, which singles her out even more. And now the Red Queen has come back to town with her two husbands and she’s about to drastically change Eiji’s life.

I enjoyed The Shadow Speaker, though I maybe didn’t like it quite as much as Zahrah the Windseeker. Eiji is a great character and the setting – that is connected to Zahrah’s world – is wonderfully unusual for Western readers. 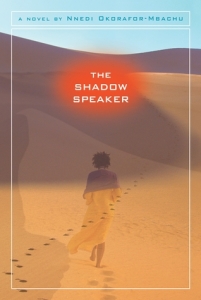 Too rarely do we get visions of the future (in popular culture) that aren’t white, Western and streamline chrome, glass and cement. Okorafor gives us just that: the Nigerian setting, the Muslim background, the rural location frame Eiji’s story completely differently than the usual stuff that gets published in Europe and the USA.

I also love the blending of magic and science, though the focus here is much less on that blend than it was in Zahrah. Even though The Shadow Speaker is mostly set on Earth, I felt that the focus was generally more on magic.

In any case, I enjoyed the entire world and the way it is set up. And I liked Eiji and accompanying her growth. The only thing I really didn’t enjoy was that when we meet the big bad at the end, the description of that guy were full of description of his fatness, giving the entire thing a distinctly fat-hating touch that really wasn’t necessary.

But other than that, I was completely taken with the book, filled to the brim with ideas as it is and with its evocative imagery.