Plot:
Katharina Wallner (Christiane Hörbiger) owns a small shop. Much to the chagrin of her landlord Heinz Ortner (August Schmölzer) she has a contract for life. He would rather have her gone, so he can rent out the shop on better conditions. It’s just when he starts to put increasingly more pressure on Katharina that Katharina’s long lost sister Hannah Laval (Maresa Hörbiger) returns to Vienna. And Hannah isn’t as nice as Katharina, not by a long shot.

I stumbled into the film and since the cast wasn’t bad, I stuck around. It’s a rather solid TV production, but it’s really not a must see film.

Admittedly I watched this film with only about half of my attention. In this case this lack of attention was an absolute advantage for the film because it meant that it actually managed to surprise me with a couple of twists that were very much telegraphed during the film, but that I just didn’t look at closely enough to see.

Despite my inattention I didn’t fail to notice the ableist slant to the plot though, that deals very problematically with mental illness and includes (sexualized) violence against women only to characterize a dude as particularly evil which is not a good reason to include it at all.

The film has a pretty nice cast, especially for a TV film. Of course, it’s also an example of the nepotism present in Austrian filmmaking. Not only are Christiane and Maresa Hörbiger actual sisters (from one of the, if not the most famous actor family in Austria), but director and writer Sascha Bigler is Christiane’s son. And Obonya is also part of the extended Hörbiger clan. But since they all did their respective jobs well, at least the result is pretty good.

Still it’s definitely not a film that you have to go looking for. If you happen to catch it, you could do worse. But in any case, it’s best not to pay too much attention to it. 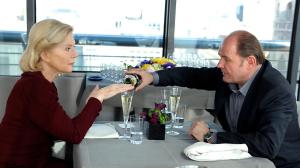