Plot:
The Covenant is a spaceship that carries colonizers who hope to find a new habitable planet. But before they reach their chosen destination, there is a malfunction that requires Walter (Michael Fassbender), a robot in charge of the ship, to wake the crew from cryostasis. As they are dealing with the aftermath of the damage, a transmission reaches them, a call for help that brings them off their intended path and down to a planet that seems to offer perfect conditions for colonization. But as soon as they land, things start to become weird.

Alien Covenant failed to leave much of an impression with me. The first half was pretty good, but the second half turned pretty boring and was simply too clichéd to work. 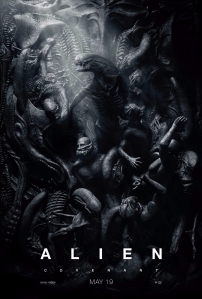 The first half of the film – from the crew waking up to their adventures on the planet – worked pretty well for me. It didn’t blow me away, but it worked. But when they get back on their ship (at the latest) the movie really devolves, offering only tired, predictable plot twists and too much of a been there, seen that feeling. (Not that the first half was all that innovative either, but it remained fresh enough.)

The film also struggled with having too many characters to juggle. That means that it doesn’t spend enough time with any of them, failing to establish them as characters and building an emotional connection between them and the audience. So when people start dying, it really carries no punch. 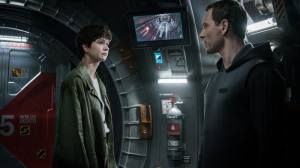 It would probably also have helped my enjoyment of the film if I remembered the events of Prometheus more clearly, because there wasn’t just one moment where I wondered about how things were left there and how it connects to this film. But that isn’t the film’s fault, of course.

At least the cast was really good, particularly Fassbender (who continues to be unable to not have sexual tension with the people he acts opposite, even when it is he himself) and Waterston. But put altogether, the film just doesn’t manage to add anything to this movie universe, except for the last scene maybe: I can see this as a good jumping off point for another film that hopefully manages to create characters we spend enough time with to actually care about.

Summarizing: It’s okay, but not more.