“Plot”:
In a performance space somewhere between Science Fiction, Disco and Tropics, six black, queer performers use the combination of the remoteness of space, retrofuturistic ambivalence of SciFi and the rhythm of music and dancing to negotiate visibility and marginalization.
[It’s difficult to sum up. You can get an impression of it here. And you can find my favorite part here.]

So far my experiences with performance art have been quite mixed. I made several attempts during the Festwochen, most with mild to no success. 2017 saw a change in the artistic leadership of the Festival, bringing a fresh (outspokenly intersectional) perspective and several performances that sounded way too interesting to pass up. Discotropic was one of them, and I have to say that I am very happy that I gave it a try despite my reluctance with (and little knowledge about) performances. It was a fascinating, immersive experience that made me question my own reactions and ideas in many interesting ways.

It took me a bit to get into the performance: it starts simple enough with “just” dancing and movement, the dancers remaining in partitioned parts of the performance space. That soft beginning gave me the time to adjust to the fact that contrary to the “normal” theater experiences, people were given several different possibilities to lay their gaze where different things happened and you had to move around and choose your point of view, quite literally (and try different points, instead of keeping still). When the performers break out of their boxes, you had to also take care not to get in their way and were required to move even more.

As I watched the performers as a cis, white (though not straight) woman, my reactions to what they were doing were constantly called into question. Their costumes, that show off a lot of their bodies, serve doubly to emphasize the color of their skin and their gender (in interaction with their sex). As the performance gave the permission to look, watch or even outright stare, I wondered whether my desire to do so was simply tied to the fact that I was watching a performance, or whether it was my inate white, cis voyeurism.

But I did not spend the entire performance staring at the dancers, because there was too much else going on. There were video projections that were interesting to watch and had incredibly aesthetics. And there was music to listen to that I enjoyed (especially the song in my favorite bit). And the lighting was pretty great, too.

Discotropic was a short, yet intense experience that managed to keep me thinking the entire time through and that made me feel like I was dropped into an entirely different existence. There is nothing more I could ask for from art. 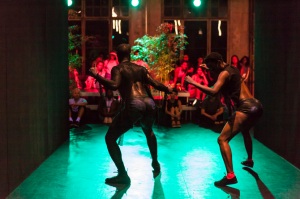