She’s Beautiful When She’s Angry has interesting insights into the history of the feminist movement and tries very hard to not just include white feminism, but reproduces the lack of trans feminism in Second Wave Feminism and only touches on lesbian activism, which I found a pity. Nevertheless, it was a good watch. 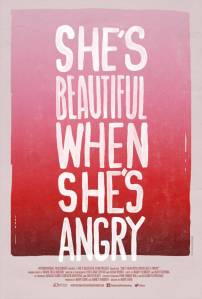 There has been a lot of debate about the role of women in history, and if you get a bit of an eye for it, you’ll notice how women constantly get written out of history, their accomplishments either attributed to men, ignored or diminished. One way to counteract this is to show how influential, political and amazing women are and always have been (other ways include to question what we see as important and worthy of remembering).

That’s the work that She’s Beautiful When She’s Angry does: tracing the evolving politics of the feminist movement by capturing what those women have to say now, almost 50 years later. And they do have a lot to say, and most of it is not only illuminating with regards to the events that happened, but simply really interesting and smart.

I almost wished to be able to take notes while watching the film (in a dark cinema that part is always tricky) to keep track of who said what and to check out the writings of the interviewed women (I also fell in love with Rita Mae Brown just through the interview bits we saw). I am sure that I couldn’t agree with everything, but I loved the feeling of passionate activism that runs through every second of the film.

With that feeling it’s easier to forgive the film its shortcomings, especially the lack of trans activists (which were certainly present in that time) and the rather quick dealing with the lesbian activism. Both points mirror the “mainstream activism” (if you will) at the time and I would have rather seen that called out and engaged with more critically than reproduced.

The film is neither without charm, nor without humor and it’s an inspiring watch. I enjoyed it.

Summarizing: Worth seeing, even if I had wished for a bit more critical distance.