“Plot”:
When Elisabeth Bakambamba Tambwe was a child, her family left Kinshasa, Democratic Republic of Congo, with the rise of Mobutu and moved to France. Today, she lives in Vienna. Now, over 40 years later, she tries to take another look at the country she and her family came from in an interactive performance that mixes dance and video installation, documentary and fiction.

There was much to like about Congo na Chanel. It’s an eccentric performance piece. But it was also a little disappointing because it didn’t, in fact, show us any images of Kinshasa.

Since I spent some time in Kinshasa myself, I was really excited about this performance and to take another look at Kinshasa and how it changed in the last 15 years. The performance kicks off with a video of superheroes running through the streets of Kinshasa. And I was absolutely shocked by that video because I recognized literally nothing of the city I lived in for a year.

Once the video installation is over, and the first non-verbal part of the performance (that was weird and fascinating and utterly enchanting) is over, Tambwe comes clean: the political situation in the DR Congo wasn’t stable enough for her to risk the safety of her team and of herself to travel there. So instead they shot in Dakar, Senegal. Which explains my sense of disorientation at the footage, but was also very disappointing for me, personally. (And while I totally understand that they wouldn’t travel to Kinshasa when the situation simply wasn’t safe, their solution does promote a certain sense of interchangeability of African countries that is already an issue for a lot of white people, so I don’t know if that was the best way to go about it.)

That being said, the more salient parts of the performance, for me, were definitely the parts that happened in the room and not on screen. Here we get performers in superhero dress who took their space, forcing the audience back and those white men get more aggressive in the course of the play. We get Tambwe in a disfiguring/disfigured costume (using disability as a metaphor is a long tradition that should die) as well as a blob under a black tarp.

I’m not sure that I understood everything the performance tried to communicate. But I certainly found it to be engaging and thought-provoking, asking questions about identity, diaspora and politics, the role of art in all of this and the thread of power that runs through all of these things. 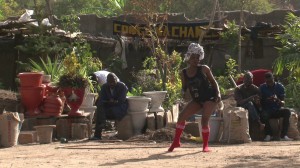 Summarizing: I wasn’t that happy about the video part, but I did like the live performance part which was the more important part in my book.