Plot:
Sam (Zoey Deutch) is beautiful, a good student, she runs with the popular girls, Elody (Medalion Rahimi), Lindsay (Halston Sage) and Ally (Cynthy Wu), she has a boyfriend Rob (Kian Lawley) and, as it turns out, she even has a secret admirer. Or not so secret, as Sam suspects her childhood friend Kent (Logan Miller). Things are awesome. At least for Sam. Not so much for Juliet (Elena Kampouris) who is humiliated at a part, as she’s humiliated every day at school. But after the party, Sam and her friends crash their car. And when Sam wakes up, it’s the morning of the day of the party, over and over again.

I like time travel stories, so I figured I’d give this film a shot even though I didn’t expect much from it. Before I Fall, then, was much stranger than I expected in many ways, but not necessarily in a good way. It’s entertaining, but it’s not a must see. 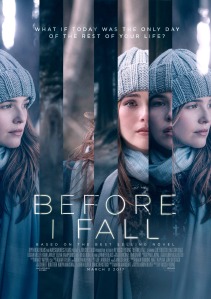 For a story that is basically the usual “pretty girl needs to be taught a lesson to be less self-involved” story rolled into Groundhog Day at a high school, Before I Fall takes some story turns that really left me scratching my head. There’s the entire self-sacrifice angle that has some distinctly religious overtones, but doesn’t quite go there.

There’s the whole story involving Kent who is creepily obsessed with Sam but because he believes that Sam is a good person “deep down” (despite all evidence to the contrary) and because he continues to tell Sam how to live her life to be the – better – person he sees in her, he is somehow the right guy for her. That is a whole lot to unpack, and most of that package is shit.

I also thought that a lot of the characters were simply weird. I don’t know if that’s on purpose or if the weirdness comes from lack of characterization, but they simply didn’t feel all that natural.

Nevertheless the film was entertaining enough so it certainly isn’t a chore to watch it. Whether that’s enough to really recommend it… I doubt it.

Summarizing: Why not watch it? But also, why watch it?