Plot:
John McBurney (Clint Eastwood) is an injured Union soldier on the run in the South during the US Civil War. He stumbles upon a girl’s school, led by Miss Martha (Geraldine Page) and finds pity in the women who don’t turn him in to the Confederate soldiers – at least not until he’s healed and stands a chance to survive. But they keep him under lock and key while they tend to him. The teacher Edwina (Elizabeth Hartman) and the girls – above all Carol (Jo Ann Harris) – are intrigued and excited by the soldier and soon vie for his affections. Not even Miss Martha finds herself unmoved as McBurney tries to turn the situation to his advantage.

The Beguiled is a protofeminist film that didn’t age well in all aspects but is still a solid, if a little predictable, movie. 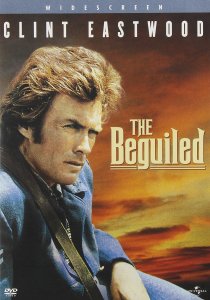 I have to admit that McBurney remained a bit of a mystery for me as a character. But it wasn’t actually necessary for me to really get his motivation entirely (I still don’t really know why he would go to the “wrong” bedroom), because he is simply a great antagonist. For the same reason I also didn’t mind that it was pretty obvious where things would be headed, because the story is a good one.

Not everything about it works, though. I could have done very much with the (sensationalistic) incest angle and without the pedophile kiss which was neither necessary nor okay. And much more could have been made of the position of the slave who stays at the school, Hallie (Mae Mercer) – there were intersting points hinted at here and there that could have been expanded on. 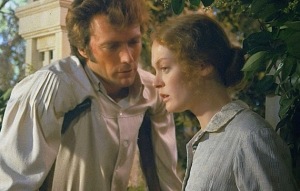 On a more technical level, the soundtrack was a little annoying and threatened to get in the way of the film here and there. And the acting was not always up to snuff either. Although I have to say that I didn’t think Eastwood would fit the role as well as he did.

Despite those weaknesses, I still found The Beguiled intriguing and I enjoyed watching it. It’s interesting and it’s definitely engaging enough to recommend watching it. 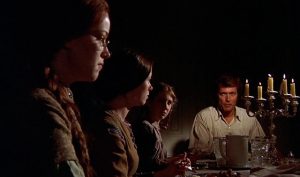