Plot:
Patti (Danielle Macdonald) lives with her alcoholic mother Barb (Bridget Everett) and her sick grandmother (Cathy Moriarty) and works a thankless job. But she really comes to live when she starts rapping. Always supported by her best friend Jheri (Siddharth Dhananjay), both morally and with beats, she’s constantly rhyming. But New Jersey isn’t necessarily a rapping hotbed, especially not for fat white women. But when Patti and Jheri stumble on punk artist Basterd (Mamoudou Athie), Patti is convinced that they have found the missing ingredient for their music to really take off. Plus, he’s intriguing and she’s curious.

Patti Cake$ had me leaving the cinema with a huge grin on my face, despite the fact that I did have some squabbles with it. It’s sweet and funny and the music is pretty great. 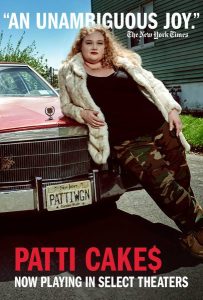 I am not sure what to make of the fact that a white man makes a movie where rapping is so central with a white protagonist and has the black people in it – with the exception of Basterd – not come across as particularly great people. Or rather, I am sure that I don’t make much of that fact. Rapping is such a quintessentially Afro-American thing that it feels wrong to have a film where black rappers are assholes and the one black person who isn’t an asshole doesn’t actually care that much about rapping.

Plus, Basterd is shown with a pretty goth-punk look at first: piercings, strange contact lenses and a penchant for skulls. But as soon as Patti and Jheri invade his life and become friends with him, he loses those accessories, as if piercings and skulls are signs for loneliness to be discarded when acutal friends show up. As a former piercing-wearer (whose friend status didn’t change before or after the piercing) and friend of skull-loving people, I resent that implication. 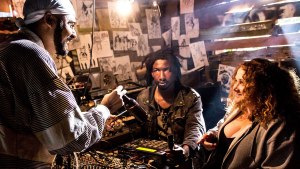 But apart from those things, I really loved the film. Patti is a great character and Macdonald is great in the role. And it was a joy to see a fat protagonist whose fatness isn’t a plot point (although it doesn’t remain uncommented) and who gets to have romance without it being ever implied that she would need to lose weight first (although I am also thinking about the fact that she gets together with a black man and that there’s a certain stereotype there as well). Especially since Basterd is a hot guy (with a voice that I wanted to wrap myself in. It’s unfortunate that he doesn’t get to speak much in the film).

There were several times I laughed out loud, but even amid the laughter, there was room for other and more serious emotions. I started listening to the soundtrack basically as soon as I left the cinema and I did leave it with a bounce in my step.

Summarizing: Despite some issues, a wonderful film.