Plot:
Karl Marx (Rory Kinnear) lives with his wife Jenny (Nancy Carroll) and children in poverty in Soho. Karl seems at odds with everyone around him, from creditors to police to his fellow critical thinkers. He doesn’t seem to mind much because, really, Karl is mostly interested in hanging out with his friend Friedrich Engels (Oliver Chris), who helps keeping the creditors at bay, and getting drunk whenever he gets half a chance. 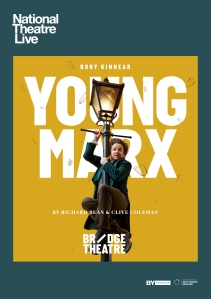 Karl, in this play, is a pretty despicable human being.He’s an asshole, he’s irresponsible and the ones who suffer most from that are his wife and his maid (Laura Elphinstone) who clean up after him and see to it that there is a home he can return to after he is done getting drunk. That he is a fun dad helps his children also very little.

Now, I can imagine that this is entirely historically accurate and it is very much not the image of Marx that floats through the collective consciousness. But portrayal of genius in pop culture being what it is, it just swaps one image of (male) genius – the aloof, always serious thinker with strong convictions – with another – the emotionally stunted asshole who may be quite incapable when it comes to everyday matters, but only because he’s occupied with more important things. And that second image is no less the subject of adoration than the first, but it does include an extra helping of sexism where, unfair as it may be, the extra work that assholish behavior causes women is somehow justified with his greatness. Ugh. They didn’t want to reproduce that cult of genius, I think, but they did. 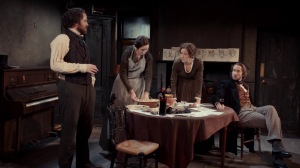 We are definitely not supposed to laugh about Karl or to find him ridiculous. Karl sets the tone of comedy here and remains firmly in control – just as Kinnear himself commands the stage. It’s an impressive performance, well-supported by the quieter Chris who played the – to me – more interesting Friedrich Engels.

Amidst all the comedy elements in the first half, sight is lost of Karl’s revolutionary tendencies. And when the play takes a bit of a shift in tone in the second half, it becomes quite dreary and doesn’t manage to sustain the energy of the first half. But maybe it only felt so dreary to me because I really, really hated Karl and didn’t want to be bothered with him anymore. 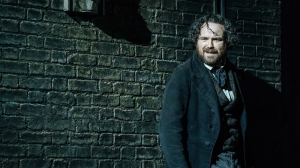 Summarizing: Has its moments, but altogether, it’s a no.