Plot:
Rey (Daisy Ridley) finishes her training as a Jedi just in time as the war of the First Order against the galaxy reaches its full height. Together with the resistance, especially Finn (John Boyega) and Poe (Oscar Isaac), it’s time to prepare for the last and biggest battle to decide the fate of the galaxy. It turns out to be a battle filled with unsuspected allies and opponents.

I’m not much of a Star Wars person, but I enjoyed this new wave of the franchise so far. Unfortunately, The Rise of Skywalker was a disappointing mess.

END_OF_DOCUMENT_TOKEN_TO_BE_REPLACED

Plot:
Centerville is a small, sleepy town where nothing much ever happens. Or at least, nothing happened so far. When police officers Cliff (Bill Murray) and Ronnie (Adam Driver) get called to investigate a stolen chicken, they realize that something isn’t right: the sun isn’t setting. Their clocks stopped working. Oh, and the dead start rising again. Soon the entire town has to face a zombie horde.

I didn’t hear much good about The Dead Don’t Die before seeing it, but I still had hope that everyone was wrong (because Jarmusch’s two last films, Paterson and Only Lovers Left Alive, were my two favorites of his ever since Dead Man). Unfortunately it was me who was wrong to hope.

END_OF_DOCUMENT_TOKEN_TO_BE_REPLACED

Plot:
Toby (Adam Driver) is a director who is trying to shoot Don Quixote in the Spanish countryside. He actually attempted this before when he was a film student – and when he stumbles upon a copy of the film he made back then. He is inspired to track down the two key actors of the film, the shoemaker who played Don Quixote (Jonathan Pryce) as well as his Dulcinea, played by Angelica (Joana Ribeiro). But when he discovers that the shoemaker is still convinced that he really is Don Quixote and that Toby is Sancho Panza, Toby is roped into quite an adventure.

The Man Who Killed Don Quixote was 25 years in the making and Gilliam fought hard to have it made. Having seen it now, I wonder whether it was worth the fight. It has its moments, but those really aren’t enough to make the film work.

END_OF_DOCUMENT_TOKEN_TO_BE_REPLACED

Plot:
Ron Stallworth (John David Washington) fought his way into the police force – and managed to become the first black police man in Colorado Springs. That doesn’t mean that his skills are particularly valued. But as Ron keeps pushing, he is assigned to go undercover to black power events like the talk by Kwame Ture. But Ron knows where the real threat lies: with the Ku Klux Klan. Making a couple of bold choices and forcing some hands, he ends up infiltrating the Klan via phone, sending his Jewish colleague Flip Zimmerman (Adam Driver) to go to the meetings in person.

BlacKkKlansman is a strong film that makes its political point eloquently and forcefully. And it’s an important point to make – made by a good story.

END_OF_DOCUMENT_TOKEN_TO_BE_REPLACED

Plot:
The Resistance are still doing their best to fight against the First Order, but they are taking serious hits. Poe (Oscar Isaac) is frustrated with the slow progress of the Resistance. Meanwhile Rey (Daisy Ridley) has gone to Luke Skywalker (Mark Hamill) to get Jedi training. And Finn (John Boyega) wakes from his coma on the Resistance ship and teams up with Rose (Kelly Mary Tran) to make sure the Resistance stays safe.

Star Wars: The Last Jedi was good entertainment but it didn’t capture me emotionally as much as it should have and thus didn’t manage to convert me from being mildly interested in the Star Wars films to want to dig deeper. But then I didn’t expect it to.

END_OF_DOCUMENT_TOKEN_TO_BE_REPLACED

Plot:
Jimmy Logan (Channing Tatum) just got fired. So instead of a regular income, he needs a different way to get some money. Fortunately he has a plan. Together with his brother Clyde (Adam Driver) and his sister Mellie (Riley Keough) they’re going to rob the NASCAR bets during a race. But first, they need somebody who knows explosives and there’s nobody more knowledgeable than Joe Bang (Daniel Craig). Fortunately, Joe is currently in prison. So they all have their work cut out for them.

Logan Lucky is very entertaining, albeit not particularly deep. It may think that it’s a little funnier than it is, but it is funny enough to make it absolutely enjoyable.

END_OF_DOCUMENT_TOKEN_TO_BE_REPLACED

Plot:
Paterson (Adam Driver) is a bus driver in Paterson, New Jersey, and likes to write poetry in his spare time. His girlfriend Laura (Golshifteh Farahani) champions him and his art, as he does his best to support her in her music and her projects that mostly involve black and white decoration. Their life is quiet and full of routines, but even so, they have their ups and downs.

Paterson is such a wonderfully warm film, I left the cinema floating on cloud number 9 like after a really good first date (only I never had a first date that left me feeling quite like this). It’s a love letter to poetry and to Paterson, NJ, and it sees and shows the beauty of the everyday so clearly, I felt nothing but love for it.

END_OF_DOCUMENT_TOKEN_TO_BE_REPLACED

Plot:
Roy (Michael Shannon) and Lucas (Joel Edgerton) are on the run with a boy, Alton (Jaeden Lieberherr). They are running from a cult and from the government, obviously intent to not be stopped, but to what ends isn’t obvious. What is obvious though is that this isn’t simply a kidnapping and Alton isn’t simply a kid. He has powers that defy understanding, even his own.

Midnight Special is a weird animal. Over long stretches I enjoyed it, although it does have lengths, but then it becomes so increasingly Christian in its imagery that I was a bit taken aback by it more and more.

END_OF_DOCUMENT_TOKEN_TO_BE_REPLACED

Plot:
It was 30 years ago that Darth Vader was defeated and the Empire fell. And it’s about as long that Luke Skywalker (Mark Hamill) has disappeared from the Galaxy. The Resistance is still looking for him. Pilot Poe Dameron (Oscar Isaac) is hot on the trail of a missing map piece for that search when he comes under attack. He hands the map to his droid BB-8 and sends it on its way. Rey (Daisy Ridley) works as a scavenger on that very same planet and she stumbles first on BB-8 and then on a stormtrooper (John Boyega) who deserted. Before they have a chance to think, they are on the run – and run straight into Han Solo (Harrison Ford) and Chewbacca (Peter Mayhew). Together they decide to try to find Luke.

I’ll come right out and say it: I’m not a Star Wars fan. I watched Episodes 4 through 6 when I was a kid and thought they were okay, watched Episode 1 when it came out and thought it was so stupid, I never even watched 2 and 3. When 7 came out, I hesitated for a while to watch it, but ultimately I figured why not? I have watched films for less reason than the cast of this one alone. And I have to say, I don’t regret watching it. In many ways it has the IQ of a potato, but it is seriously entertaining and very nice to watch. 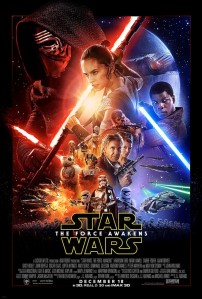 END_OF_DOCUMENT_TOKEN_TO_BE_REPLACED

Plot:
Josh (Ben Stiller) and Cornelia (Naomi Watts) have been together for a while and are quite settled in their lives as their friends left and right start to have children. Josh gives lectures at uni and works on the same documentary he’s been working on for years, Cornelia works as a producer with her father Leslie (Charles Grodin), a famous documentary filmmaker. One day after class Josh is approached by Jamie (Adam Driver) and Darby (Amanda Seyfried), a young hip couple. Josh is flattered by their admiration and they start to hang out together more, making both Josh and Cornelia painfully aware that they are not 20 anymore. But maybe they can change that.

While We’re Young wasn’t bad, but it wasn’t great either. I had fun for the most part, but the end did leave a weird taste in my mouth. 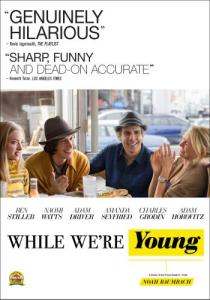