Plot:
Roy (Michael Shannon) and Lucas (Joel Edgerton) are on the run with a boy, Alton (Jaeden Lieberherr). They are running from a cult and from the government, obviously intent to not be stopped, but to what ends isn’t obvious. What is obvious though is that this isn’t simply a kidnapping and Alton isn’t simply a kid. He has powers that defy understanding, even his own.

Midnight Special is a weird animal. Over long stretches I enjoyed it, although it does have lengths, but then it becomes so increasingly Christian in its imagery that I was a bit taken aback by it more and more.

As long as it isn’t clear where the film is headed, as long as the story is being set-up, I was enjoying it very much. There were some tense moments (like the drive through the dark), I was guessing at what was happening (at some things more than at others admittedly) and the movie was moving at a quick pace. But when they started to give answers to the questions they raised, things started unraveling for me.

Part of that was because everything felt a little too familiar. The crazy cult, the government agents, the light shooting out of Alton’s eyes, the connection with sunlight (at least the film has the decency to mention Superman), the “returning home” plot – there’s a lot that we’ve seen before. But even more disconcerting for me were the parallels with Christian mythology. I’m not a huge fan of religious overtones to films (or anything else for that matter), so that part really bugged me: you have the kind, boy who can give comfort and love with a glance and has so much more power than he realizes. He comes from a place of higher beings of light and there he has to return, only spending a short amount of time on our earth (where he quickly gathers a substantial following), perfectly willing to sacrifice himself for a plan nobody really understands, always hoping to comfort those around him. All of that made me feel like I was watching the scifi equivalent to Narnia. (If you take that reading seriously, the cult basically represents Judaism – a weird orthodox religion that sees that there is a special prophet in their midst but isn’t able to understand what he teaches, ultimately turning into his enemies. I don’t think I have to point out how utterly problematic that isl.) 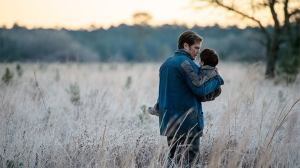 Of course, that is only one way to read the film and I doubt that it is even the intentioned way. But for me it was such an obvious message that I couldn’t see it any other way and I didn’t like it (although it was intriguing). Another thing I didn’t like was the fact that there is basically only one woman in the entire film – Alton’s mother (Kirsten Dunst). The cult does get a few female followers, but other than that, it’s a man’s show – and that I’m pretty sick and tired of.

There are interesting aspects to the film and the cast is fantastic but ultimately, it left me cold and didn’t manage to win me over or to make me believe.

Summarizing: Many people are taken with it. I’m not.