Plot:
Many years ago, Anne Elliot (Sally Hawkins) was engaged to Frederick Wentworth (Rupert Penry-Jones), but took the advice of her motherly friend Lady Russell (Alice Krige), as well as listened to the opinions of her father Sir Walter (Anthony Head) and her sister Elizabeth (Julia Davis)and dissolved the engagement since Wentworth didn’t have much standing. Quite by coincidence Frederick is back in her life after years in the Navy and has made a name for himself as well as a fortune. Anne is convinced, though, that he will never forgive her for her past actions. And when her cousin William Elliot (Tobias Menzies) starts courting her, she might be getting another chance, despite being alread 27 years old and still unmarried.

Despite my love for Sally Hawkins, this version of Persuasion absolutely did not work for me. Which is not her fault, but mostly due to the script and the direction.

END_OF_DOCUMENT_TOKEN_TO_BE_REPLACED

I just had a first look at the reviews Wastwater has been getting – and they’re toroughly mixed, which I don’t really understand. I think Wastwater is what theater should be like: it’s excellently written, has a great cast, a beautiful stage design and was very well directed. You could wish for nothing more. 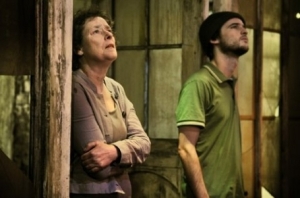