I just had a first look at the reviews Wastwater has been getting – and they’re toroughly mixed, which I don’t really understand. I think Wastwater is what theater should be like: it’s excellently written, has a great cast, a beautiful stage design and was very well directed. You could wish for nothing more.

Wastwater is pretty bleak. It’s not Ian-McEwan-the-world-sucks-so-hard-it’s-better-to-kill-yourself bleak, but it’s close. The world there really isn’t a happy place. What connects the scenes with each other – apart from some earlier events we hear about – is a sense of emotional disconnection and loneliness.

These themes are explored with intelligence and apparent ease without actually providing any answers or explanations. Nothing is really as clear-cut as it seems at first. Harry can’t accept Frieda’s affection because he doesn’t love himself. And Frieda can’t really let go, even when she probably should. Both Mark and Lisa* seem to be perfectly adjusted – apart from the fact that they plan an affair. And then Lisa’s past triggers their even more “forbidden” desires than just plain adultery. Is Jonathan buying the child for adaoption of pedophilia? And if Sian really doesn’t care, why does she ask all those more or less nonsensical questions? 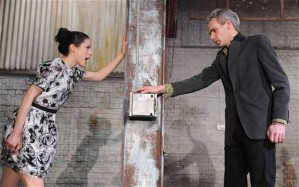 The cast was perfect. I just wanted to point out the performances that impressed me most, but it was actually all of them, so that’s kinda pointless. [Though I was most surprised by Tom Sturridge because The Boat That Rocked wasn’t exactly a glowing recommendation. But he’s actually really good.]

And after all this praise, when I say that what I actually loved most about the play, was the stage design by Lizzie Cachlan that really should tell you something. It was beautiful.

The only thing I didn’t like that much that after the last scene, the curtain opened once more to just show the empty stage for a few moments. Could have done without that.

*I couldn’t help but smirk at that name combination. The Room has ruined me.