Plot:
Catwoman (Lee Meriwether), Joker (Cesar Romero), Penguin (Burgess Meredith) and Riddler (Frank Gorshin) have teamed up and hatched a plan to extract money and power from the world. Now all that’s needed is for them to defeat Batman (Adam West) and Robin (Burt Ward) to make sure that they don’t destroy their plan.

The 60s TV show and film are a unique experience. It’s the epitome of silliness. They’re pretty much the funniest thing ever and I love it everytime. 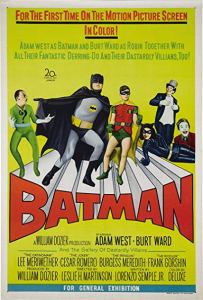 END_OF_DOCUMENT_TOKEN_TO_BE_REPLACED

Plot:
The Penguin (Danny DeVito) was brought up in the sewers after his parents abandoned him because of his disability. Now he wants to rejoin society and he thinks that Max Shreck (Christopher Walken) is the person who can help him with this: Shreck is a popular business man who has successfully hidden the shady side of his business – but Penguin threatens to expose him. But even as Penguin’s plan seems to work, Bruce Wayne aka Batman (Michael Keaton) becomes suspicious. And he finds that his suspicions may align with the newly appeared Catwoman (Michelle Pfeiffer), even if their methods and goals do not.

Batman Returns does have some weaknesses and some moments that made me want to headdesk, but with that incarnation of Catwoman, I can’t help but love the film. And I definitely liked it better than the first one. 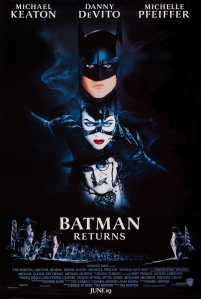 END_OF_DOCUMENT_TOKEN_TO_BE_REPLACED

Plot:
Gotham City is filled with corruption and basically run by crime boss Grissom (Jack Palance). But then a new figure enters the playing field, shifting the power dynamics quite substantially: Batman (Michael Keaton). Photographer Vicky Hale (Kim Basinger) is intrigued by the phenomenon and decides to find out who is behind the mask. Hoping to speak with Commissioner Gordon (Pat Hingle), she attends a charity eventy hosted by Bruce Wayne – not knowing that he is the man she is looking for. Meanwhile Grissom’s right-hand man Jack Napier (Jach Nicholson) is sent on a mission of his own – a mission that is about to change him very much.

It’s been many years that I watched the older Batman movies, and while I love them all, this one was probably the one I remembered least. Re-watching it with a bit of distance made it feel a little disappointing, although there are still many good things about it. 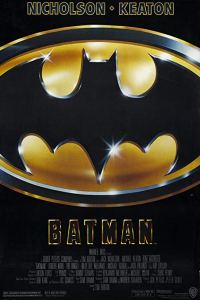 END_OF_DOCUMENT_TOKEN_TO_BE_REPLACED

Plot:
Bruce Wayne aka Batman (Will Arnett) leads a rather lonely existence. Between beating up criminals like the Joker (Zach Galifianakis) and eating lobster thermidor prepared by his trusted butler Alfred (Ralph Fiennes), he spends most of his time alone and in pain at the memory of the family he lost. But things change rapidly when Bruce not only accidentally adopts an orphan (Michael Cera), but the Joker and pretty much the entire league of supervillains surrender themselves to Barbara Gordon (Rosario Dawson) who just proposed a new approach to crime for the police. But there must be something behind that surrender and Bruce has to find out.

The Lego Batman Movie is a celebration and parody of all things Batman and more. It’s as funny as it is nonsensical, and yet it manages to say more about the character Batman than more serious adaptations have managed. But at its heart, there is not much behind the jokes. 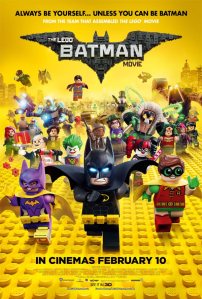 END_OF_DOCUMENT_TOKEN_TO_BE_REPLACED

Plot:
The world loves Superman (Henry Cavill), if not to say that they actually worship him. With his superhuman powers, he is a tremendous hero, of course – but should he ever stop to help humanity, who could possibly put up a fight against him? That’s the question Bruce Wayne, aka Batman (Ben Affleck), asks himself. He has watched everything else around him fall, so it seems only a question of time until Superman falls, too. So Bruce starts to devise a plan with which he might be able to stop Superman, should it ever become necessary. And there are signs that it will.

Batman v Superman is not a good film. That wasn’t to be expected. But it is actually so bad at times, it becomes grotesque. Since I’m late to the party and Ben Dreyfuss already put it beautifully, I’ll give you the perfect quote about the film, before imperfectly listing my own thoughts: 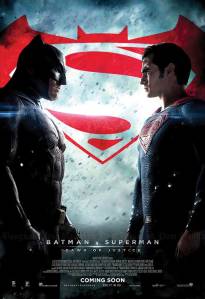