Plot:
The world loves Superman (Henry Cavill), if not to say that they actually worship him. With his superhuman powers, he is a tremendous hero, of course – but should he ever stop to help humanity, who could possibly put up a fight against him? That’s the question Bruce Wayne, aka Batman (Ben Affleck), asks himself. He has watched everything else around him fall, so it seems only a question of time until Superman falls, too. So Bruce starts to devise a plan with which he might be able to stop Superman, should it ever become necessary. And there are signs that it will.

Batman v Superman is not a good film. That wasn’t to be expected. But it is actually so bad at times, it becomes grotesque. Since I’m late to the party and Ben Dreyfuss already put it beautifully, I’ll give you the perfect quote about the film, before imperfectly listing my own thoughts:

I have some theories about this film and I’ll just bulletpoint them out to you because forming a coherent text from all of them would most likely be enough to fill a thesis. And who would want to read that? 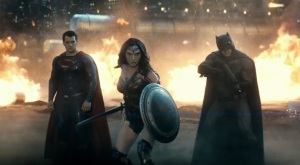 There are some good things in the film: I like pretty much the entire casting (with a minor exception: I wish Wonder Woman was actually built like a brick house and not like slender Gal Gadot, but Gadot was good in the role), including for the JL-film. I especially liked Affleck’s Batman – with a good script and a good director, he could have been great. As is, we only get glimpses of greatness, especially when he interacts with Alfred (Jeremy Irons, another highlight). And… huh. Maybe there were just some good people in a film without any good things.

Yeah, that sounds about right.