END_OF_DOCUMENT_TOKEN_TO_BE_REPLACED

Plot:
Satellites pick up a strange signal from outer space and soon huge spaceships arrive and position themselves around the earth in strategic points. Communications expert David Levinson (Jeff Goldblum) is convinced that the aliens will attack and tries to get in touch with the President of the USA (Bill Pullman). Since the two of them don’t have the best history, this is easier said than done. When counterforces are finally mobilized – led by people like Airforce Captain Steven Hiller (Will Smith) – the aliens turn out to be near invincible. What is needed now is creative problem solving and everybody working together.

I was 11 when Independence Day came out and I don’t know how many times I’ve seen the film since, though it had been years that I’d seen it. After the catastrophe of the new film, I decided that a re-watch was in order to wash away the bitter aftertaste. An excellent decision, as ID4 is still an entertaining bit of popcorn cinema, even after all these years.

END_OF_DOCUMENT_TOKEN_TO_BE_REPLACED

I watched Spaceballs a lot when I was a kid (certainly more often than Star Wars which it spoofs) but it has been years since I last watched it (it is still one of the films that gets quoted in my friends’ group from time to time). And I don’t think I ever saw it in English before. So when they showed it for a night in the Gartenbaukino, in honor of the release of Episode VII I figured it was the perfect moment to revisit it. And I still loved it.

END_OF_DOCUMENT_TOKEN_TO_BE_REPLACED

Plot:
Mike (Jesse Eisenberg) and Phoebe (Kristen Stewart) have a great life together, if you consider smoking a lot of weed, working dead-end jobs and never leaving the small town they live in a great life. At least they very much love each other. But their existence is completely destroyed when it turns out that Mike is the product of a CIA experimental program which used to be run by Victoria (Connie Britton). But Victoria was demoted, her program scapped and her new boss Adrian (Topher Grace) decided to obliterate the last remains of her program – that means killing Mike. Victoria decides to go against the plan and activates Mike, causing Adrian and his henchmen who came for him a world of trouble.

American Ultra is an entertaining film that is a little uneven but definitely fun to watch. 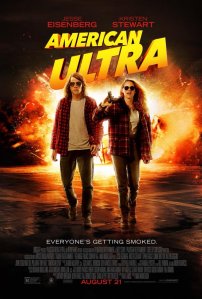 END_OF_DOCUMENT_TOKEN_TO_BE_REPLACED

So, the last entry on the past weekend’s movie escapades. And we really had an interesting mix – good, bad and finally pretty mediocre.

You Kill Me promised to be good. The cast was fine – Ben Kingsley, Téa Leoni, Bill Pullman and Luke Wilson [even if not necessarily first rate], the story seemed interesting and the trailer promised us laughs, and a lot of them. Unfortunately, it did not deliver.

But first things first. The plot. [SPOILERS! Not that there’s much of a surprise.]

It’s simple, really. Frank’s (Kingsley) an assassin for the Polish Snow-Plow Mafia in Buffalo and an alcoholic. After majorly screwing up a job [he falls asleep instead of killing the Irish Mafia boss, who threatens to take out the Polish one – look, sorry, Buffalo isn’t big enough for Italian or Japanese, I guess], he’s sent to San Francisco to sober up.
In San Francisco, the shady real estate agent Dave (Pullman) sets him up with a flat, a job and an AA group and threatens promises to keep an eye on him. The job’s at a funeral parlour, where Frank’s learning to prepare the bodies for the open casket ceremonies. He soon meets Laurel (Léoni) and falls in love with her.
At the AA meeting, Frank meets Tom, who becomes his sponsor and best friend [and is almost never really in the story anymore].
We’re now about half an hour into the movie and suddenly, things stop happening. Frank and Laurel get closer, Frank has some relapses, Tom listens to Frank complain.
And then we’re about 15 minutes before the ending and the Polish Mob boss gets shot back in Buffalo, by the Irish Mob boss, and Frank goes back to avenge him, supported by Laurel, who followed him there. Frank kills the Irish Mob boss, Laurel helps him and they probably live happily ever after.

[Also, the end of the SPOILERS.] 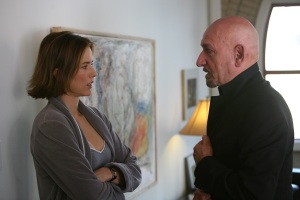 I have a question: Is anybody else seriously freaked by the size of his ears?

So. The movie wasn’t bad, the acting was fine, the script had funny parts [unfortunately almost all were featured in the trailer already], but this couldn’t change the fact that at 93 minutes runtime, it was one of the longest movies I’ve ever seen. It was boredom, occasionally interrupted by a laugh.

The characters were pretty shallow, the story was, too, the ending was unsatisfying, the whole mafia thing unnecessary…

My recommendation for this would be to watch the trailer and read the quotes on imdb and you’ll have like 90% of the jokes covered. And the rest is pretty dismissable. Or watch it somewhere, where it doesn’t matter if you slowly drift to sleep.