Independence Day: Resurgence feels like they wanted everything at the same time. They wanted to basically recreate Independence Day by casting the same people and telling the same story, but they also wanted to one up it by making the stakes worse and introducing new elements. They wanted people to nod their head at all of the familiarity, but also be floored and surprised by what’s happening on screen. In the end nothing about this works, neither the old nor the new.

With the old parts one has to wonder why we would want to watch this regurgitated version and not the original because there is simply not enough development for the characters and their stories, with the new parts one has to wonder why we should care about all these new characters and how the new alien powers fit in with the old canon because they don’t get too much room either.

In my head there is a streamlined version of Independence Day: Resurgence that actually works. Most of the new characters aren’t in it (seriously, what did we need Liam Hemsworth’s Jake Morrison for when we have Jessie T. Usher’s Dylan Hiller – just so there’d be a white boy starring in this?), the misogynist undertones of the queen alien explanations aren’t in it and, as much as I love Jeff Goldblum, his part is cut down, too. Sometimes less is more. It is a film where the destruction of the earth is fun again (something Emmerich used to be good at) and not self-referential and boring as fuck. (I seriously fell asleep for a bit during the showdown because who fucking cares.) And those things are just the first things that would have to change.

Unfortunately I was not involved in the making of the film and what we got sucks big time (I’m not saying there is a direct causal relation, but the evidence speaks for itself, no?). It sucks so much, it actually sucks the joy out of the audience and leaves you drained and dazed as you can practically feel the cash-grabbing hands that made this film pulling out of your pocket. Disappointing is putting it mildly. 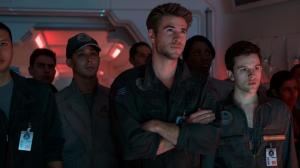