Plot:
Winfried (Peter Simonischek) is a strange man, a bit of a prankster. After his dog dies, he decides to visit his daughter Ines (Sandra Hüller) who works in Bucharest as a consultant. The two of them don’t really speak or get along all that well and Ines is not exactly thrilled at having her father drop by unexpectedly. But Winfried won’t give up trying to reconnect. Instead he becomes the eccentric Toni Erdmann, saying he is the German ambassador and starts showing up everywhere Ines goes, much to her consternation – at least at first.

Toni Erdmann came with high accolades and high expectations on my part. Unfortunately it almost completely failed to work for me. 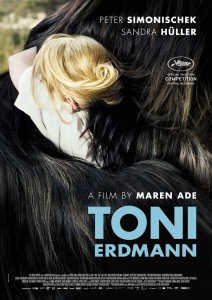 Before going into the film I heard things like it was the funniest film of the year and that people had laughed their way through it despite its runtime of almost 3 hours. And I admit that every once in a while there were brilliant scenes and jokes that made me laugh a lot, like Ines’ singing, her office birthday brunch and the conversations around the cheese grater. So the humor of the film didn’t completely pass me by, although I hate most pranks. [Admittedly though my biggest laugh came during the scene where Ines meets up with her fuckbuddy. In that scene he comes on a petit four that she then eats – not exactly the most savory thing to do. So it’s not that much of a surprise that during that scene there came a loud “eewww” from the audience (mostly made up of the generation 60+ in this case). Only, they didn’t say that in reaction to the cum-eating but to the fact that we actually see the dude’s penis. And that had me in stitches, but it has practically nothing to do with the film itself.]

But it didn’t reach me as much as it could have – and that’s mostly due to the fact that I was horrified at the way Winfried continuously oversteps the boundaries Ines sets – and that the film applauds him for it because ultimately it leads to the both of them getting closer and isn’t that a good thing? It’s just such a paternalistic “father knows best, even when he’s weird” approach that I simply could not stand. I imagine my own father doing this – and we’re actually close, so he does know me contrary to Winfried and Ines – and I would probably start hating him. 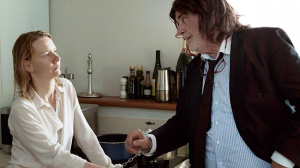 I spent most of the film feeling uncomfortable about the main storyline and a few smaller things, like how Ines treats her assistant Anca (Ingrid Bisu) or generally the way Romania becomes this backdrop for a story that is all about Germans. That is also not changed by acknowledging globalization and problematic business practices. (The fact that for the last hour or so of the film I really had to pee didn’t help either.) That all meant I had a hard time laughing about the film or connecting with the characters and their tragedies.

Toni Erdmann is a well-made film with an excellent cast. I can see it working, it just really didn’t work for me, although I really wanted to like it. 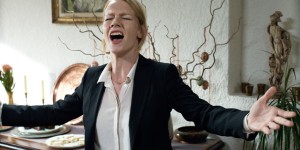 Summarizing: Give it a try by all means. But personally I can only watch the praise the film is getting with a slight look of disbelief and a shrug.