Plot:
Leyna (Amandla Stenberg) is a German bi-racial teenager. When Hitler rises to power in Germany, she gets caught between the lines: her German-ness is disputed because of the color of her skin, no matter how hard Leyna fights for her place. Lutz (George MacKay), on the other hand, is just what the nazis like: blond, German, member of the Hitler youth and son of a high-ranking SS officer (Christopher Eccleston). When the two of them meet, they are drawn to each other, but they are in the worst position to live their love.

Where Hands Touch tackles a really interesting topic that hasn’t been looked at a lot (at least in popular media): what happened with and to black Germans in World War Two? Unfortunately, the way it goes about it, is a little clumsy.

END_OF_DOCUMENT_TOKEN_TO_BE_REPLACED

Plot:
Macbeth (Christopher Eccleston) and Banquo (Raphael Sowole) just fought successfully for King Duncan (David Acton) and are finally on their way home. In the woods, they meet three witches who predict, among other things, that Macbeth will become King. Spurred on by that prophecy and uncontent to just wait for it to come true, Macbeth and his wife (Niamh Cusack) hatch the plan to help things along when Duncan comes to visit. But murder comes with moral consequences – and it might not be the only thing necessary to make Macbeth King.

This take on Macbeth is interesting and mostly well done, but it doesn’t work in all regards, ultimately turning out weaker than I had hoped and expected from Findlay.

END_OF_DOCUMENT_TOKEN_TO_BE_REPLACED

Plot:
After a group of animal rights activists tries to free monkeys that have been infected with a rage virus, all hell breaks loose. But Jim (Cillian Murphy) knows nothing of that – he wakes up in hospital 28 days later to find an apparently empty world. Looking for an explanation and narrowly avoiding the infected, he finds Selena (Naomie Harris) and Mark (Noah Huntley) who fill him in. Together they take up the fight for survival.

I have heard many good things about 28 Days Later… and so my expectations were very high. While the film is solid and good, it couldn’t quite match those expectations. But that doesn’t mean that I didn’t enjoy it. 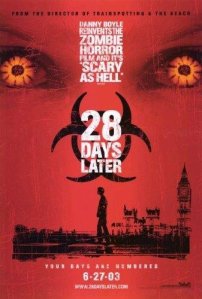 END_OF_DOCUMENT_TOKEN_TO_BE_REPLACED

Plot:
Ever since the events in Avengers, Thor (Chris Hemsworth) has done his best to ensure the peace across the realms, while Loki (Tom Hiddleston) is locked up on Asgard. Which means that Thor doesn’t have time for Jane (Natalie Portman) who is still waiting for him. But when Jane stumbles on the Aether, an ancient weapon, Thor comes to her aid, just as Malekith (Christopher Eccleston) comes for the Aether, planning to destroy the universe with it.

As much as I love the first Thor movie – and I do – I have to admit that it doesn’t quite reach the heights that Thor: The Dark World reaches. I can’t remember the last time I laughed so hard in a movie, especially an action movie. It does almost everything completely right and it’s just plain great.

END_OF_DOCUMENT_TOKEN_TO_BE_REPLACED

Plot:
McCullen (Christopher Eccleston) is the world’s biggest arms dealer and he has just created a new kind of bomb based on nanotechnology. Duke (Channing Tatum) and his army squad, are supposed to transport it to NATO. But en route, they are attacked by The Baronness (Sienna Miller) who happens to be Duke’s ex. Duke does his best, but ultimately he and the bomb are saved by the Joes, a super secret elite army team. And Duke decides that he wants in with them.

I never watched G.I. Joe because all I heard about it was how freaking bad it was – in fact, so bad that it crosses so bad it’s good territory and is just plain boring. Turns out that that is completely untrue. Don’t get me wrong, this is not a good film. But it is a hell of an entertaining one.

END_OF_DOCUMENT_TOKEN_TO_BE_REPLACED

Plot:
Marion (Vanessa Redgrave) and Arthur (Terence Stamp) have been married for a long time, despite being opposites: Marion enjoys life to the fullest, while Arthur’s main hobby is being grumpy. But now Marion is slowly dying of cancer. She still spends a lot of her energy in the local seniors’ choir though, led by Elizabeth (Gemma Arterton) and tries to reconcile Arthur and their son James (Christopher Eccleston). After Marion dies, Arthur at first risks to fall into complete social isolation. But somehow he ends up taking over Marion’s hobby, singing in the choir.

I went into Song for Marion expecting a fluffy piece of entertainment, with nice music and some good laughs. And I got all that. But what I didn’t expect, but ended up having anyway, was a crying fit (in the best of ways) – I basically started during minute 2 and only stopped when the credits started rolling.

END_OF_DOCUMENT_TOKEN_TO_BE_REPLACED

Plot:
Amelia (Hilary Swank) wants to be a pilot, and not just any pilot. With the help of publisher George Putnam (Richard Gere) she manages to be the first woman to cross the Atlantic (even if “only” as a passenger). From then on, she continues to challenge herself and set new records, while trying to encourage women everywhere to become pilots themselves.

After the abysmal reviews Amelia has been getting (and it didn’t even saw a cinematic release in Austria), I didn’t expect much from this film. [But how could I not watch a movie that featured both Ewan McGregor and Christopher Eccleston?] But I was really pleasantly surprised. It’s actually a really nice film.

END_OF_DOCUMENT_TOKEN_TO_BE_REPLACED

Okay, that’s it. You know now that I spend WAY too much time watching TV shows. Anything you can recommend or would like to warn us about? Comment away!